Double Digit negatives – what a way to start the day! 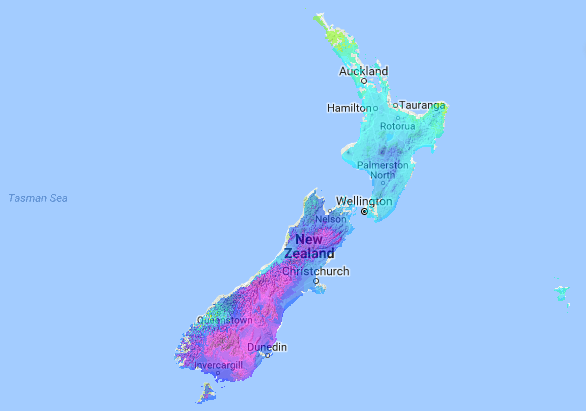 It is freezing – across the South Island this morning temperatures have plummeted to -10 degrees this hour. Around Alexandra it has dropped to -10 as of 7:30am, as have other alpine parts of the Southern Alps.

Invercargill, another coastal city, has -6 in some suburbs this hour along with Gore also on -6. In fact much of Southland is around -5 and -6 this hour.

Arrowtown is on -7 with Queenstown area between -4 and -8.

Reefton on the West Coast has -5 and it’s -3 in parts of inland Nelson.

The further north you go the ‘warmer’ it gets – due to windier, cloudier and/or wetter weather, temperatures across the North Island are mostly above zero.

Manawatu is hovering around 0 degrees. The weather stations around Waiouru have gone offline, but were 0 degrees earlier this morning with heavy snow.

Some parts of Waikato are down to 1 degree but with a breezy wind frosts aren’t likely today – but tonight. Most places are +5 or higher.

HAWKES BAY UPDATE
Meanwhile heavy rain and snow continues in the ranges of northern Hawkes Bay but is now easing – it will dry out across today with the worst of the weather now coming to an end. Most of the rain is falling north of Napier and around Wairoa to Gisborne and is gradually becoming less widespread.  Heavy snow in the ranges will become lighter today and stop eventually.

Image / 7:30am temperature map shows icy conditions in the South Island and warmer weather in the North Island due to the low pressure system up there / Wundermap