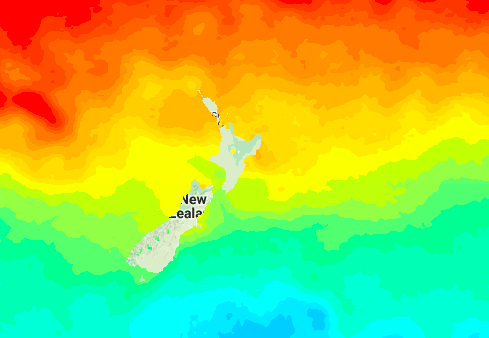 Yesterday humidity levels in the upper North Island hit the late 90% to 100% range making for a misty, wet, low cloud sort of day. With humidity levels so high coupled with higher temperatures (as we can have high humidity on a foggy cold winters morning) many people were complaining to us and on social media yesterday about the ‘muggy’ conditions.

At the peak of the complaints Auckland, Hamilton, Tauranga and Whangarei were all hovering around 96% to 99% humidity with temperatures around the low 20 degree mark.

Air north of New Zealand has more moisture in it – air south of NZ is usually drier (Antarctic is the driest continent on earth). So a southerly often brings drier conditions after the initial cold front with rain/showers has passed by. The air is certainly lower in humidity when it’s a true southerly. If a northerly event kicks in (as we saw on Friday thanks to a high north of the country fuelling a sub-tropical air flow down over the upper North Island) we see humidity levels rising and the chance of ongoing downpours, fog and an increase in cloud.

So why are we headlining this news story as a negative one for humidity haters?

Global scientists have already declared a weak La Nina is here – and for New Zealand, especially northerners, this usually means more days like…well…yesterday.  So, that means this summer is expected to be wetter, cloudier and more humid than average – this has already been the case for spring in many areas.  With the added summer heat coming in you’ll probably notice the higher humidity levels around the country too – as it’s the heat that makes for that “muggy” feeling with the humidity.

As of 9am Saturday humidity levels were fairly high again in the north – which is why we have had fog patches across Waikato, Auckland and Northland.  Right now humidity is still near 100% in some areas, but it is dropping into the 70 and 60% range as the weekend kicks in and the more refreshing but windy westerlies (so that’s a whole other news story of complaints!) kick in, especially on Sunday and Monday.

The positive silver lining(s)?
We have two. 1) La Nina this summer is “weak” according to global scientists. In other words, it may not be too harsh on New Zealand. 2) New Zealand, being mainly two islands in the roaring forties surrounded by ocean means we can buck international climate trends to some degree. So it only takes one high pressure system that is several times the size of our country to perhaps put the brakes on the humidity for NZ this summer and give us long dry sunny spells too.

– Image / Current sea surface temperature map shows how warm it is north of NZ and cold it is south in the water. The warmer the water the more likely we are to see rain and humidity / Weathermap