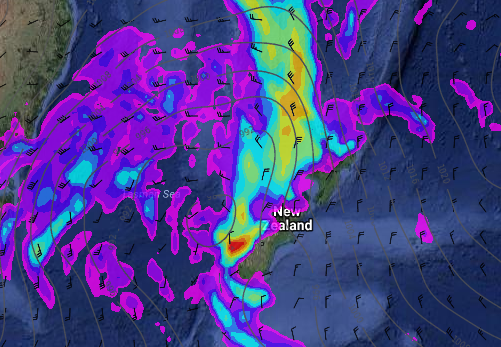 Just when you thought the rough weather was over Winter reminds you “we’re only at the half way mark” of the season as yet another wintry blast of wind and rain heads towards New Zealand.

Unlike last week’s rough weather, which was caused by a small low pressing into a big high, the low this week is much deeper and therefore the unsettled weather is more widespread. The energy is also spread out further so we may not be seeing such intense weather in one small area (like how Cook Strait was last week).

Instead heavy rain will likely impact both islands, starting in western and northern regions on Thursday and into Friday and then swinging around into southern and eastern places later into Friday and Saturday while clearing elsewhere to showers, or mainly dry.

A warmer sub-tropical northerly flow kicks in across New Zealand on Wednesday – a cold southerly arrives on Friday PM and Saturday as the low tracks by.

HEAVY RAIN & SNOW
Heavy rain arrives on Thursday – to the north and west of both islands and may prompt rain warnings in both islands (mainly northern or western facing regions).

By Friday heavy rain kicks into the south east of the South Island as a colder southerly arrives with rain though Otago and into Canterbury – the colder air will likely turn this to heavy snow down to just a couple of hundred metres again impacting highways and farmers mostly, not so much the main centres.

Much of the North Island has showers or patchy lighter rain on Friday however it’s worth noting snow may again impact the Desert Road, State Highway One around Friday PM/Saturday AM.

By Saturday a wintry southerly will push showers into the east of the country including Christchurch and Wellington and up to Napier/Hastings while the sun comes back out for many others.

STRONG WINDS
The intense winds last week were caused between two air pressure systems squashing up through Cook Strait – a bit like how water in Lake Taupo gets squashed through Huka Falls and creates an incredible burst of fast flowing water right that in that spot. This week the winds are caused mostly by a deep low pressure system forming over the country (down to the 980hPa range) and with a blocking high to the east of the country the pressure gradient will be steep over a very large area. In other words, winds will pick up gradually for most of New Zealand but the energy should be spread out over a much greater distance than last week.

Nor’West gales – or just blustery northerly quarter winds – look to be fairly widespread on Thursday but the good news is that they will likely remain well below damaging threshold in most places – but wind warnings are possible. A system like this can change a bit so we still need a bit more time to lock in.

By Friday a very strong or gale southerly will spread up the South Isand’s east coast and into Wellington/Wairarapa and this may be the windiest part of this low (although we still need to wait another day or two to lock in).

Severe southerly gales are possible hugging the coastline of Canterbury and into Wellington and Wairarapa on Friday for a time too – but at this stage this isn’t an exact repeat set up to the gales that hit Cook Strait last Thursday.

TIMING:
The low, wind and rain moves across New Zealand over Thursday and Friday, easing into Saturday.

TRAVEL:
Flights – some risk strong winds and low cloud/rain may impact some airports – at this stage mainly on Friday PM. Smaller aircraft in Christchurch and Wellington airports, at this stage, might see delays or cancellations if these winds eventuate as forecast. This is just a possible issue with the weather, it’s too far out to lock in – check for our daily updates.
Roads – Snow on Friday is possible on highways above 200 or 300 metres in the South island and also later into Friday night/Saturday AM around the Desert Road, SH1, for a time. This isn’t the same set up as last week but snow closures or delays are certainly possible in both islands due to the wind, rain and higher up snow falls.

– WeatherWatch.co.nz will have daily updates on this next event through until Saturday.