Home > News > Daytime downpours about to dominate the ...

Daytime downpours about to dominate the time of Weather Forecasters 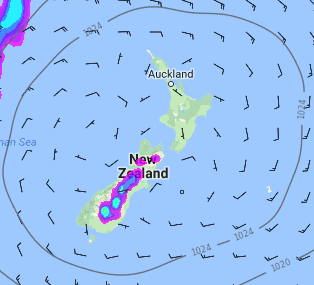 As most of you know a large belt of high pressure is crossing New Zealand and will take the rest of November to do so.

It’s the same block of high pressure that is giving Melbourne and Hobart their (potentially) warmest November since records began there back in the 1800s.

But it’s not a perfect high for New Zealand – by that WeatherWatch.co.nz means it won’t all be clear and sunny skies. In fact the continually changing shape of the high structure over New Zealand means daytime heat showers are going to become a standard part of the weather forecast over the coming week.

In fact, it may surprise you to know that these big highs with daytime showers can produce some of the most intense workloads for weather forecasters in New Zealand. The nature of the downpours and cloud build-ups means they all need to be monitored, when/where possible. Large downpours can lead to localised hail, thunderstorms, flooding and even tornadoes and unlike other slower weather events these often need to be live monitored continuously until the clouds fall apart… several hours later.

For example yesterday WeatherWatch.co.nz tracked a large storm cell tracking northwards east of Hamilton over the Waikato plains. It produced thunder, surface flooding and even a funnel cloud near Te Aroha in Eastern Waikato (which if it touches the ground then becomes a tornado).

So the next several days ahead will be busy for forecasters having to monitor these downpours which occur mainly inland, and usually peak in the afternoons and early evening and drift one way or another in the light variable afternoon winds.

GENERAL DOWNPOUR RISKS UNTIL SUNDAY:
The thing with these downpours is they can pop up anywhere and with only a light breeze can drift quite a distance. It’s one of those situations where we can’t truly monitor conditions until the day has started and build ups begin. They are unique to develop every day, as if night hits the reset button.

As of today, Wednesday, these were the general risk areas for downpours in the coming days: 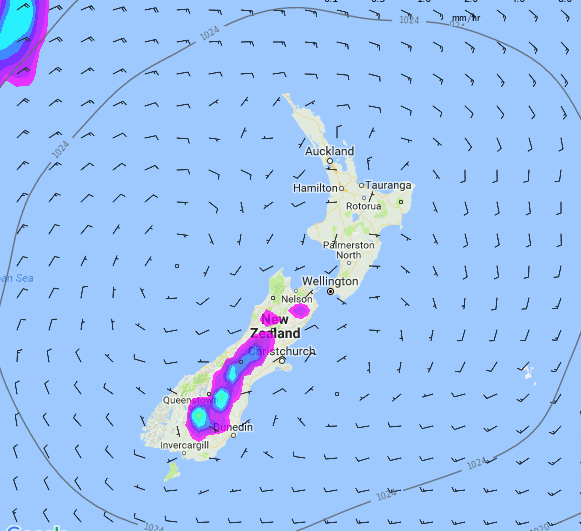 – Thursday afternoon’s air pressure map with rain shows where the downpours are likely to flare up despite the perfecetly shaped high directly positioned over New Zealand. Map by Weathermap.co.nz