Daylight Saving Time returns to the USA this weekend 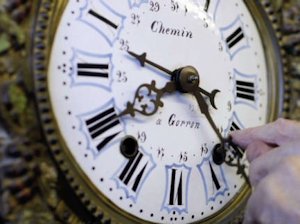 As the northern hemisphere heads toward spring, most of the United States will be setting their clocks ahead one hour before going to be Saturday night.

Not only is that a headache for many Americans, it can be a real headache for non-Americans.  Converting to one of the 6 US time zones is about to change.

For the record, there are a lot more than 6 US time zones.  But there are 6 major ones.  Hawaii, Alaska, Pacific, Mountain, Central and Eastern.

Be careful though, not everyone observes DST.  For example, most of the state of Arizona including the city of Phoenix ignores DST.  So the conversion to their time zone won’t change.  Hawaii doesn’t change either.

And of course, we’re not through yet.

On Sunday, April 7th, we go back to Standard Time.  That means we turn our clocks back one hour.  Which of course means, we will need to re-learn all the conversions again.

Or, you could just go time the “What time is it in (insert your city)” in a Google search box and get the correct time that way.  This is another great resource: www.timeanddate.com/worldclock/

Officially, the change takes place at 2:00am Sunday, local time.