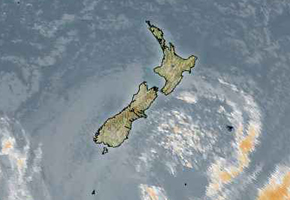 Today over the country we have a southwesterly airflow, and it is quite interesting how a small change in the airflow one way or another can create a big difference to certain areas.

Cloud and showers are affecting outer areas of Banks Peninsula today here in Canterbury while the city remains dry with sunny periods and some cloud, if the flow was tilted slightly more to the south however Christchurch would be getting a few showers during the day. This occurs due to the fact New Zealand lies in a SW to NE orientation and it splits the airflow up in a way as it moves over the country travelling up and along the coastlines.

So it becomes critical to determine / forecast the correct path showers may take as a slight movement in airflow one way may mean showers for somewhere you didn’t initially expect them to be, which can then lead to a very wrong forecast and many unhappy people. Critical southwesterly airflows can be a bit of a headache for forecasters but as always we aim to do our best.

Fairlie is an example where even when the coast and other areas of the Canterbury plains get showers in particular southwest airflows they often always remain dry. I’m sure many of you would know the area you live in quite well and due to New Zealand’s terrain many places have peculiarities where local knowledge is the key often more so then a degree hanging on the wall, not to say that can’t help at times either.

Over the last couple of Nina-dominated years there have been few true SW flows around Cook Strait – and correspondingly more southerlies. There is hope that this is changing now – an annoying side effect of the more frequent southerlies in the last 2 years is that this has helped lower our sunshine and increase the rainfall. Yesterday was a wonderful SW/WSW day in W’gton – little or no wind, intense blue skies and waters.

Interesting comments RW in regards to the airflow around Wellington

I understand what you mean in that La Nina is fading a bit, in my case El Nino brings higher thunderstorms chances here in Canterbury so that’s what I’m hoping for!