Could NZ be facing a polar blast a week from now? (+Maps) 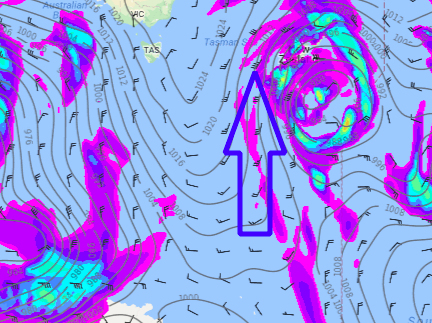 The weather pattern next week will be the most unsettled pattern of the year so far around New Zealand says WeatherWatch.co.nz and reliable long range data is increasingly seeing a polar blast in our part of the world next weekend.

WeatherWatch.co.nz head forecaster Philip Duncan says there are two things to look for ahead of a potential polar southerly. “Firstly we need a deep low pressure system to the south east of Dunedin and secondly we need a huge high stretching from north to south centred near Tasmania”. Mr Duncan says that appears to be the set up for the end of next week in our part of the world although it is “not yet locked in”.

This same high pressure system is currently covering almost the entire nation of Australia, but it may possibly morph into a new shape end of next week as it drifts closer to New Zealand and combined with a deep low near Dunedin the two may create a polar southerly. “If this set up occurs the two air pressure systems work in tandem to scoop up cold air from nearer to Antarctica then both systems work to dredge that colder air right up and over both main islands of New Zealand” says Mr Duncan.

However there is so much chaos between now and then WeatherWatch.co.nz cannot yet lock this in. The long range data for one week from now is still conflicted about if this colder air nearer to Southland will surge as far north as Northland. Latest maps today indicate the southerly may not have quite enough oomph but we still have a few days to go to confirm. Either way it’s an early heads up about a possible windy cold direct southerly a week from now.

Expect a very windy week next week (especially the South Island and Cook Strait) with the chance for a late week southerly that could extend across next weekend in both islands. We’ll know more by Monday (maybe earlier) on whether or not a polar blast is looking quite likely, or less likely, as the late Autumn chaos truly sets in. 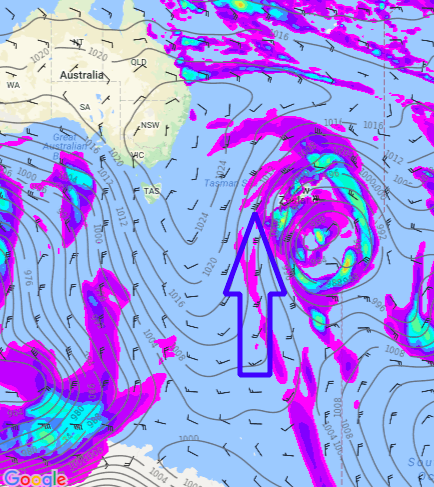 – Noon Saturday May 26th showing a potential very cold southerly – but perhaps not quite off the ice shelf itself / Werathermap.co.nz