Home > News > Cold Tuesday for some with a Hot Wednesd...

Cold Tuesday for some with a Hot Wednesday & Thursday for others! (+4 Maps) 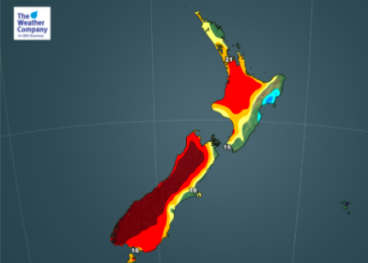 Daytime highs of just 12 degrees are forecast for some New Zealanders on Tuesday but by Wednesday just further inland it may be 30 degrees with isolated downpours as a large week-long-high rolls in.

A southerly flow around the eastern side of the country will continue today and into Tuesday dropping temperatures for some ahead of hotter weather later in the week.

Tuesday will be cooler especially in the South Island’s east with main centres like Dunedin only reaching 14 degrees and Christchurch 15 with drizzle. Wellington only reaches 17 degrees (today is only 16 with the SE breeze continuing). Some more remote areas may only make it to around 12 degrees on Tuesday at the warmest point.

The cool change is short lived. By Wednesday all of these centres warm up to around the 20 degree mark with sunnier weather and lighter, warmer, winds.

Across Wednesday and Thursday inland parts of New Zealand will not only be hotter than average for this time of year, but they will actually be hot! Highs of up to 30 degrees are possible inland.

The hottest weather will be inland through both islands due to the large high across New Zealand creating mostly clear skies inland and light winds. Coastal areas may be cooler due to light winds leading to cool afternoon sea breezes and more cloudy spells.

Alexandra in Central Otago is forecast to reach 28 degrees on Wednesday with some surrounding communities climbing up to 30 degrees. Queenstown has a high of 26 this Wednesday. This is several degrees above the norm for mid November and usually highs near 30 in November come with the gusty nor’westers – this week looks mainly calm inland.

In the North Island both Taupo and Taumarunui have forecast highs of 25 degrees on Thursday with a chance of up to 27 degrees in some pockets inland through King Country or South Waikato.

In Morrinsville, Waikato and other surrounding towns in the area highs around the mid 20s are possible all week.

Again, coastal cities and centres may not feel the heat – but you’ll still have high pressure and sea breezes.

Finally, isolated downpours are likely to develop this week through some of these hotter inland areas – but also other hills and ranges. This is most likely later in the week and over the weekend but some will occur this week anywhere from the Far North to the Deep South.. 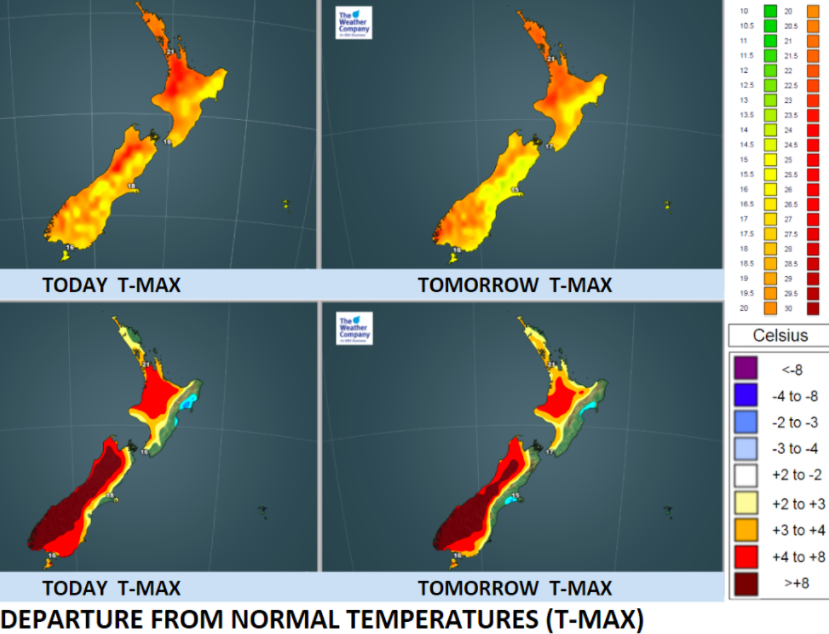 – Maps by The Weather Company (An IBM business and an official WeatherWatch.co.nz business partner).