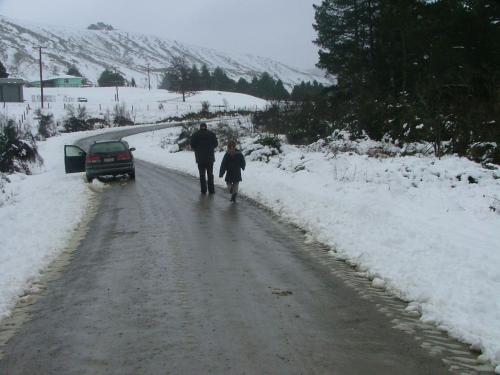 The centre of the large low pressure system that’s brought gales, thunder, snow, flooding and slips is about to cross the North Island in the next 18 to 24 hours, reports WeatherWatch.co.nz.

In the next few hours a cold front will cross northern New Zealand bringing widespread heavy showers, some squally with isolated thunderstorms.

Temperatures will also take a dive tonight and tomorrow following an incredibly warm night in the north last night.  At midnight several centres will still around 19 degrees.

Tomorrow snow is likely on the Desert Road and temperatures will be several degrees lower tomorrow night as the southerly kicks in.

We just had a couple of flashes of lightning and a few rumbles of thunder here in Torbay, hope there’s more to come!

26.4 mm of rain so far today in Blenheim.
barometer 987.7 rising quickly.
10.2 deg at the moment.
sw wind of 3.5 kn/h.
a lot of surface flooding and a couple of small slips around the queen Charlotte drive from picton.

No rain today in our part of blenheim? Taylor river which runs through town; normally a picturesque walk overflowing in many parts and runnig faster than normal. Surface flooding and care needed on Old renwick Road.

we just had a massive downpour of rain, it lasted for about a minute and our whole driveway is flooded and our water tank was overflowing like a waterfall!
Never seen anything like this before!

Here in Kaukapakapa there are very dark clouds coming closer, they look very angry. any thunder/lightning in these clouds? hail?

Hi there guys, here is a update for Tauranga at 03:52pm

Is there rain on the way tonight?

Feilding had around 12 pm lasst evening so thunder and heavy squalls of rain.. right now its light breezes and a few drips and draps not much to write home about.. So is this the lull before the storm 🙂