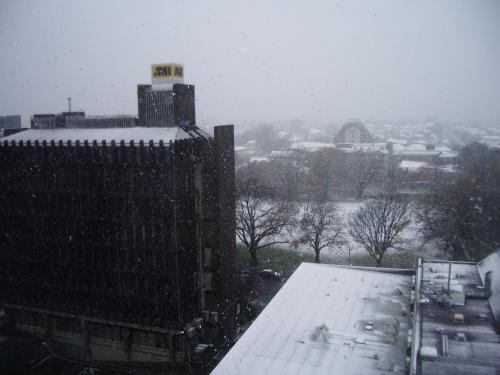 Wintry conditions are spreading across the North Island with the cold front now moving into Manawatu.

The system appears to be running 3 to 6 hours later than originally forecast however is still expected to pack a punch across many northern regions.

Aucklanders have woken to a spectacular day with blue skies and light winds.    Conditions are mild with almost 15 degrees in the shade.

But colder weather is being felt further south.    Temperatures between 3 and 7 degrees are being recorded across the Wellington region with wind chills well below zero and winds gusting between 80 and 120km/h.

It’s just 1 degree in Waiouru with snow more than likely ‘setting in’.

Heavy snow is still being predicted by WeatherWatch.co.nz for the central North Island and eastern ranges and a light dusting is still possible later today or tonight in the Kaimai and Coromandel ranges.    The South Island has had snow across inland Canterbury but very little anywhere else.

Heavy showers are now moving in to western parts of Northland while the first of the southern showers and rain spreads into Taranaki, Wanganui, Manawatu and Central Plateau.

Sunny, warm, northern centres aren’t expected to remain that way as the afternoon progresses.  The cold southerly change is likely to shave several degrees off most highs today and tomorrow.

light rain and only 6.4C in Waiuku at 4:26pm
you dont see conditions much colder while its raining here!
Wind from the SSE

We’ve suddenly been hit by some very gusty wind on the North Shore. Not felt the house shaking like this since the weather bomb last year!

So far we have had snow (for about 1 minute), hail, rain, strong winds and sunshine – and all before lunchtime.