Cold air arrives in south – a number of cold days ahead 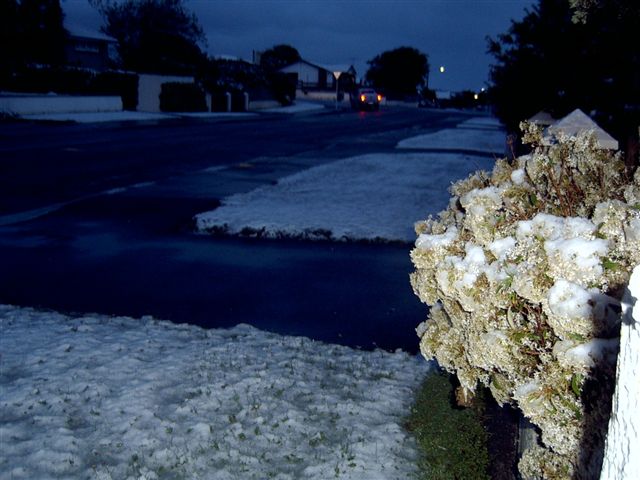 Cold air has this morning arrived in the far south with strong, cold, westerlies for some.  In Invercargill winds are gusting to 70km/h this morning.

However winds will shift more southerly overnight tonight with sleet and light snow flurries possible in Invercargill and Dunedin however mixed with strong to gale winds, wind driven snow may create blizzard conditions.

MetService has this morning issued snow warnings to sea level across Southland and Otago.  Click here for the latest weather warnings relating to this system.

WeatherWatch.co.nz says the cold snap is merely brushing past New Zealand however the cold air will mean several cold days on the way with no sign of the broad northerlies we saw last week returning anytime soon.

The coldest air should arrive after midnight tonight in Southland and work its way north during Tuesday and Wednesday, however weakening as it does so.

With the arrival of the southerly blizzard conditions will make driving hazardous at times in Dunedin and across Southland and Otago however snow fall is unlikely to be heavy enough to close the Desert Road at this stage.  WeatherWatch.co.nz will keep you posted on any changes surrounding the forecast for around Waiouru. With overnight lows dropping to -6 on the Desert Road black ice could be a real concern during Wednesday night and Thursday and Friday mornings, however possibly isolated enough for road crews to keep the highway open.

The cold air will arrive in Wellington later tomorrow, then Auckland on Wednesday.

Auckland is expected to only reach 12 on Wednesday with several days of 13s ahead.  Last week Auckland reached 18 degrees with a feels like temperature of 22 thanks to a humid northerly.

I was just looking at the metservice site after reading the comments on WW and their rain radar is showing a lot of shower activity around Auckland, do you use a different one?

Been a fairly nice day in Whangarei with a good deal of warm sunshine, the west to southwest wind is cool but out of that it is warm. Occasional shower in some areas but mainly dry.

Looking forward to the cold dry spell, dry the ground out I hope as it is very soft, had enough of the showery stuff for a bit even though it was warm with it.

Was only showing very small isolated showers this morning yet we were having a prolonged downpour.  On Saturday heavy showers on the radar all around Auckland except most missed the city!

Bring on the colder (more southerly weather) clear this garbage we’re having in Auckland.

Next to nothing on Aucklands rain radar and its hosing down here…. Funny….
When something is on the radar it misses us ha!

Funny you should say that…I was just thinking the exact same thing!