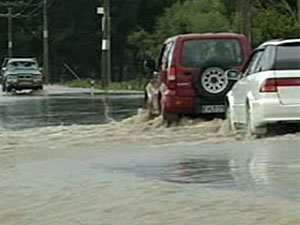 One school of thought about temperatures rising over a period of time in this part of the world suggests that West Coasters could see more rain falling than was initially expected.

The argument does continue in the public domain about global warming however Mountain Rainfall specialist Dr Tim Kerr, from Niwa, said while current thinking was that our high-altitude hydro dams would fill up as temperatures increased, his research suggested the opposite.

Dr Kerr says some of the findings show that currently snow is falling at higher altitudes however if the temperatures were to climb, the snow could start falling as rain and cover the West Coast resulting in some potential difficulties.

Currently, the total amount of water that falls on New Zealand each year is about 560 billion cubic metres, including rain and snow. That’s enough to cover the whole country in water 2.1 metres deep.

Fortunately for city dwellers, most of it falls in the mountains.

The Cleddau Valley which is just to the west of Milford Sound, has an estimated average annual rainfall of 13.4 metres, which makes it one of the wettest areas on the planet.

Another region of the soggy mountains is the Cropp River in the Hokitika River catchment, which in just 12 months received more than 18 metres- a staggering amount of rain.

Comparing this to our larger cities and  Wellington and Auckland average 1.2 metres; Dunedin is less than a metre and Christchurch is the driest of the four main centres and clocks up just 0.6 metres.