Home > News > Cloudy unless your in Westland...

Cloudy unless your in Westland 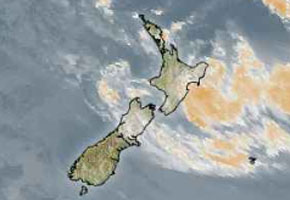 Skies are mostly cloudy over the North Island today, there are a few sunny breaks sneaking through at times. Scattered showers are also about the place but many dry areas as well, some of these isolated showers are a little heavy by the looks at times.

Temperatures are very nice north of the Waikato despite the cloud, 17 and 18 degrees looks common and perhaps some areas may crack 19 in Northland today. Cooler about Wellington in the low teens at present.

The South Island’s West Coast as forecast is sunny and has brilliant weather, there is some cloudy areas however north of about Greymouth. Light rain or drizzle has made it to Christchurch this afternoon but not as far as Ashburton for the time being and may stay away from there till tonight.

A weak front approaching the lower South Island at the moment will blanket most eastern areas tonight with cloud and drizzle. Temperatures are cool for most in the south today however it is warmer on the West Coast, will be interesting to see more official temperatures readings this evening from the likes of Milford.