Home > News > Cleanup begins after strong winds on The...

Cleanup begins after strong winds on The Shore, flights delayed 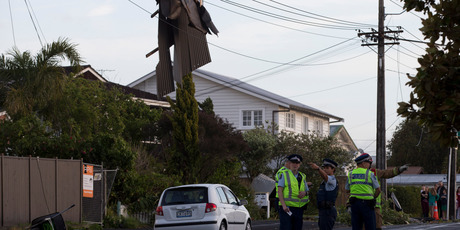 Flights from Auckland to Wanganui have also been cancelled, while other flights have faced minor delays.

An Air NZ spokeswoman said weather conditions at Wellington Airport had caused significant disruption to domestic link services into and out of the capital this morning.

“At this stage domestic jet services have not been impacted.”

Customers booked to travel to or from Wellington this morning were advised to keep an eye on the Air NZ arrivals and departures website for latest updates.

A JetStar spokesman said flights between Wellington and Auckland had been delayed this morning due to the high winds in Wellington, however no flights had yet been cancelled. 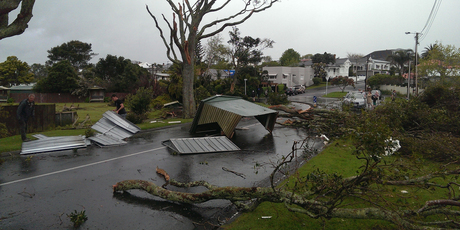 Contractors are cleaning up storm debris in Devonport this morning, and more strong winds are forecast for the city.

A handful of properties remained without power this morning, down from 600 at the height of the event.

The wind struck just after 6pm and most of the damage appeared to have been confined to the area east of the Waitemata Golf Club.

Debris littered Vauxhall Rd and large sheets of corrugated iron hung on power lines like washing hung out to dry.

Auckland Civil Defence controller Clive Manly says contractors were out last night clearing loose debris, and will continue to do so this morning.

“There was gale-force winds forecast for the night so we wanted to make sure that the big stuff that had been [blown down] – branches and stuff – weren’t going to blow around.”

Building inspectors were set to inspect properties damaged by the squall this morning, Mr Manly said.

Temporary tarpaulins were used to cover some properties last night.

“There was a roof gone and there was bits of damage to about five other properties. They were made safe, so it was dry.

“Today we’re following it through with building inspectors to see what permanent repairs need to be done.”

No one was evacuated from their home last night, Mr Manly said.

“There was one house that had the roof gone, but they were overseas, so they weren’t impacted and there others all stayed in their houses. There was only minor damage.

“We’re very fortunate; it was … very short, sharp and gone in a few seconds. We were very lucky that there was no serious damage done.”

“That was due to a Telecom pole coming down largely on some of our assets.

“Most of that power was restored by 8.20pm and we had a handful of customers still off overnight – that was due to service lines – the line from the power pole to their property being damaged.

“They’ve got to get electricians out today to look at them.”

About seven properties were still without power, Ms Hodge said.

“We heard this really loud whistling sound and then it came towards us but then veered off a bit.”

Victoria Silvey, 12, was in her lounge when she saw timber, leaves and poles “floating in the air”.

They were whirling around in a funnel of wind that lasted about 30 seconds before leaving the area, she said.

The garage door of Sarah Maher’s Grahame St property was dented by debris and the glass of her back door shattered.

“I was on the phone to my husband, who’s in Wellington, and I said ‘wow the wind’s really picking up, I’ve never seen anything like it’. Then I said ‘oh my God, I think it’s a tornado’ and dived underneath the stairs.”

Westerlies of up to 100km/h were forecast for the Auckland region today.

why are you persisting in calling it a squall damage when evidence points to a small tornado
(i.e narrow path of destruction)

Actually big squalls can produce the exact same trail of damage – but the damage, from what we and MetService have seen, is mostly ripped and blown in a straight line which indicates this was a squall.  Tornados can blow debris 360 degrees for some distance. Our reporters told us it was mostly straight line, which goes against a tornado. Also, no rotating clouds were observed – and MetService haven’t said they saw any rotation in their high res radar.  A narrow path of damage isn’t evidence of a tornado and both main forecasters predicted the risk of late thunder with localised damaging winds.