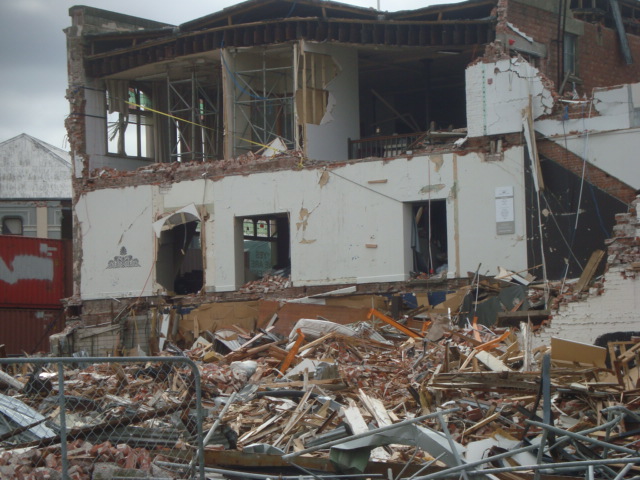 The power of mother nature rips this parking metre up.

Some parts of the city are alive with action – as demolition crews work their way through the damaged buildings.

No way in – at every single entrance point into the CBD you’ll find at least two soldiers keeping guard 24/7.

The beauty of Autumn in front of the horror of nature.

Army vehicles can be seen all over the city.

The Garden City looks more like a war zone.

At one of the security checkpoints a soldier appears to be writing a letter as another long day of ensuring the public don’t access the red zone arrives.

A tow truck went by with this vehicle on it… was quite a surreal moment.

Several cars on tow trucks went by – this one clearly had been up to the bonnet in liquefaction.

All lights are orange – the traffic lights all around the CBD flash orange with so many roads remaining closed.

It looks more like a third world country than somewhere in New Zealand, let along the CBD of Christchurch.

Many buildings looked absolutely fine – until you look at them close up.

It’s a bit hard to see, but this carpark – like ALL paved areas in the city – is all bumpy from liquefaction.  While it doesn’t look significant, driving on it is another thing.  Most roads around the city and neighbouring suburbs are tricky to drive over 30km/h on due to the bumpy nature, caused by liquefaction.  In some areas springs have surfaced and water still bubbles out.

Quite undignified – shops and apartments appear naked to the outside world.

Time to reflect – on my tour of the city people stopped in silence to take photos and to view the damage.

Holy!!!! These are great shots of my hometown Mr Duncan – it’s weird because I have to look really hard at some of them to realise exactly where the photo has been taken and even then it’s hard to know, the city has changed soooo much, super scary and very surreal!!! Thank YOU ;o)

Can we quit with all the pics and everything please about the earthquake.
It may seem interesting from further afield but it’s a bit close to home.
Just imagine if Auckland had a disaster and all we did was rubber neck in your neighbourhood.
Thanks
Ralph

Appreciate your comments and understand it must be tough having to see more photos.  However without the media taking photos and video the rest of the country would soon lose interest.  My motivation for taking the photos and publishing them was for the people outside of Christchurch to have a better understanding as to how crippling this event has been.  I also know of people from Christchurch who don’t want to visit the CBD but feel the need to see what has happened.  Hopefully media coverage will mean less need for people to go into the city and visit for themselves.  Please note that this is the final Christchurch earthquake special WeatherWatch.co.nz will be doing unless there are further serious quakes.

Hopefully this the last update which means no more quakes,though I am in Auckland,Chch is a beautiful city and a large part of the countrys infrastructure and the people there wish to see uninteruppted rebuilding.