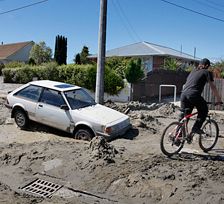 The level of liquefaction after Tuesday’s 6.3 magnitude aftershock dwarfs the amount caused by the original earthquake that hit Christchurch in September, Mayor Bob Parker says.

He says the amount of damage is particularly high in the city’s eastern suburbs.

“The scale of this is huge.

“Possibly 300 to 500 per cent the level of liquefaction we had in September.”

Liquefaction happens when soil is subjected to severe shaking, causing it to lose strength or stiffness.

It is most likely to occur in soils with poor drainage.

At a press conference this evening, Mr Parker also reminded Christchurch residents to conserve water amid efforts to repair the city’s infrastructure.

That means not watering gardens and shutting down automatic irrigation systems, he says.

“These things go without saying but sometimes you’ve got to say them.”

As much of the city was still without water, Mr Parker said there were now 780 portaloos now in city, another 250 in transit, 963 en route from USA and 5000 chemical toilets.

Mr Parker also gave an update on the Hotel Grand Chancellor, which has been at risk of collapse since Tuesday’s devastating quake.

He said the hotel may need to be brought down so rescue and recovery teams can enter damaged buildings in the city centre.

A four block area around the damaged building has been cordoned off due to fears it could collapse.

“It causes us significant problems. Clearly there needs to be some kind of resolution.”

At the same press conference, Inspector Derek Erasmus said the official death toll had not risen from 113.

He released two more names of deceased – 46-year-old Andrew Christian Ross Craig and 32-year-old Jeff Pelesa Sanft, who the Herald earlier reported was a young father who died when a bus he was travelling in was crushed by debris.

Mr Erasmus also said a 323-strong team of Australian police have been sworn in as New Zealand officers to aid the recovery and rescue operation in Christchurch.

Their presence will be vital as police check damage, sift through rubble and look to stop a rash of crime in the city, Mr Erasmus said.

Six minutes later a 3.3 magnitude quake hit, only 1km beneath the surface within 5km of Diamond Harbour.

The shocks came after a gap of several hours since the last recorded quake.