It’s the headline we’ve been hoping to avoid all year – but the reality of a lack of winter rain for the region at the start of a warmer than average spring does not bode well for those who need it.

WeatherWatch.co.nz broke the news to CountryTV viewers yesterday, explaining that the drier and warmer than average winter means the set up as we head into a traditionally windy, drier, warmer time of the year is not good.

We’ve also told the Ministry for Primary Industries of our forecast.

While the outlook is gloomy, due to sunshine, it’s not all doom and gloom.

“WeatherWatch wants to provide support to those in need of rain and while we can’t give false hope we can focus on where possible rain makers might come from” says head weather analyst, and CountryTV forecaster, Philip Duncan.

Here are some positives to think about if you’re stressed about the current conditions:

“It’s important to keep in mind all of these potential positives – we can’t rule them out, all of this is possible even if we can’t put it in the 10 day forecast yet”.

Speaking of the 10 day forecast for Canterbury it does look fairly dry but there is a chance of a few showers on Sunday night or Monday morning.

But it’s also very important to be honest about what is going on – and the negatives that spring can bring to dry Canterbury, to help you better prepare for conditions drying out further – if they do:

In fact, it’s that last negative point that WeatherWatch.co.nz says might be a feature this spring or summer. “Think about the middle of winter this year, that one night around 9 o’clock when it was 23 degrees in Kaikoura. Imagine that same air flow arriving around mid-afternoon in late spring or late summer?” says Philip Duncan. “A set up like that could see temperatures in Canterbury soar into the late 30s or even the early 40s – we’ve been breaking heat records every month in 2016 so this is not out of the question”.

Mr Duncan says a high in the low to mid 40s could occur if the current warmer than average theme runs into summer with air flows coming to us from Australia’s interior or well into the tropics. It’s hypothetical – but possible, based on 2016’s theme.

From a false hope point of view for farmers and growers it was quite disappointing the tax funded NIWA forecast was off for Canterbury again too – although not completely for all. The government owned forecaster predicted normal to wetter than normal weather for the drought hit region both before and during winter and while that never occurred in North Canterbury there are indeed some pockets of relief in more central or southern parts of the region due to a combination of spillover West Coast rain and some wetter southerly activity earlier in August – while very welcome to some, this rain relief was not for all.

More heat is coming – and Now!

The air flow over the next few days is going to get warmer and warmer – as both Australian and Sub-tropical air flows combine over the nation thanks in part to a high north of the nation. The spring westerlies will then blow this *much* warmer than average air across the country – this process both warms the air up and dries it out. This means highs into the low 20s for Canterbury on Friday – and maybe even the mid 20s for the eastern North Island on Friday or Saturday.

Seriously, we have conditions more like the end of spring rolling in to some parts of New Zealand for the start of spring 2016.  That doesn’t mean we’re finished with the cold – we still have cold days coming up in the first half of September, but it does seem that more heat records look set to be broken this spring. 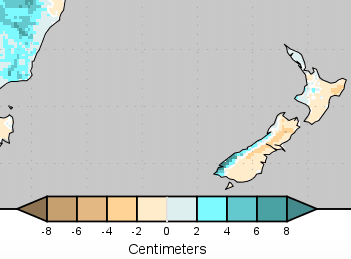 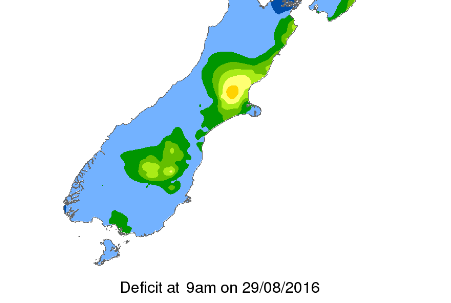 Part of NIWA’s latest soil deficit map showing North Canterbury much drier than it should be at the end of winter / Courtesy NZ Taxpayer.