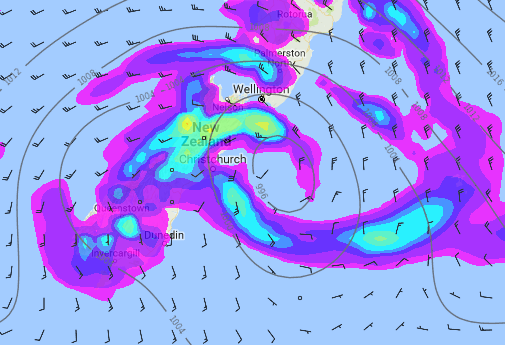 The cold snowy southerlies of both early August and early September gave one region in particular some added moisture – Canterbury.  The angle of Canterbury means a southerly comes straight on in to most parts of the region, even more when the wind flow is sou’east which can get into South Canterbury a bit better.

The areas remains drier than it should be for this time of the year and while windy dry westerlies of spring are moving in, there are still some wet days coming too.

WeatherWatch.co.nz said back in August that one big positive for Canterbury this September is the fact we have no driving weather force – El Nino died back in Autumn and La Nino (El Nino’s opposite) may arrive later in our summer. This places us in a neutral weather pattern and this can spell chaos in the weather pattern.

Chaos is good news when you’re stuck in a drought – as droughts are usually caused by repetition. Chaos means we can have a polar southerly that brings in moisture – it also means we can have sub-tropical and Tasman Sea lows.

This week it’s the Tasman variety heading towards the South Island.

As usual the rain is coming into the West Coast first, which means “spillover rain” is expected in Canterbury. The ranges of the Southern Alps do an effective job at shredding the rain clouds leaving only patchy spits into Canterbury quite often.

On both Friday and Saturday a low in the Tasman Sea will hug the West Coast bringing patchy spillover spits of rain/showers to Canterbury.

On Saturday night and Sunday this low will transition to lie east of Canterbury in the Pacific Ocean – a good position to bring in wetter south to south east winds to the region.

By Monday it clears away to the east taking any remaining showers with it.

The chance of rain for this weekend is chopping and changing from 40% to 80% but generally it’s hovering around the 60 and 70% range which is getting above moderate confidence.

While next week looks mainly dry for Canterbury again there are some hints of a repeat performance with another low possibly drifting towards the South Island from Australia in about 10 days time.