Home > News > Canterbury quakes: When will the shocks ...

Canterbury quakes: When will the shocks end? 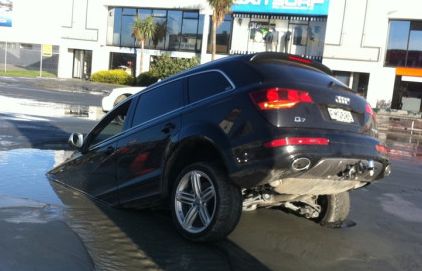 By Paul Harper of NZHerald.co.nz — One year on from the September 4 earthquake, Cantabrians are still asking when the aftershocks are going to end.

Just this week, three jolts magnitude 4 or larger have shaken the region, following weeks of a relative lull in seismic activity.

In the twelve months since the magnitude 7.1 earthquake, more than 8,000 aftershocks have struck the region.

The number is likely to be much higher, with many of the smaller ones going unrecorded.

“Particularly after some of the bigger earthquakes you miss some of the smaller ones just because they are lost in the noise – so you don’t pick them up in the same way,” GNS Science seismologist and geohazard modeller Matt Gerstenberger says.

Casting his mind back twelve months, Dr Gerstenberger says the thousands of aftershocks fit what was expected at the time.

“I think it has fallen in line with what we would expect,” he says. “It’s not unexpected given the size of the main one.”

However the two destructive magnitude 6.3 tremors, on February 22 and June 15, were less expected.

“More often than not, you would not get two in that size range,” Dr Gerstenberger says.
“It is certainly not unexpected that they occurred but it was not the most expected outcome.”

Unfortunately another large one cannot be ruled out.

“There’s a small possibility now for another [magnitude] six, but if you look at the numbers we have it is quite small.

“We can’t ever rule that out.”

Dr Gerstenberger says the aftershocks may continue for “decades”, although felt events could be months or years apart. For example, there are still small aftershocks from a magnitude 7.8 quake which struck Buller in 1929.

“As you can see in the last weeks and months, the numbers of events per day are gradually slowing down, [but] it will take many years for it to get back to the level that it was at prior to the occurrence of the [September 4 magnitude 7.1].

One year on, the sequence of earthquakes has given GNS Science a wealth of data, which is being used to help better understand the volatile ground beneath us. GNS Science is also involved in 22 Canterbury rebuild projects.

“But in the background the scientists are doing research on all the data which has been captured in the last year. There’s a huge amount of data which will take them quite a while to sift through and analyse. They’ve only done first cut analyse at this stage. But it is a real treasure trove of information in terms of earthquakes.

“It is internationally significant because for an urban earthquake it is probably one of the best ever recorded urban earthquakes in the world. There were about 60 seismic instruments within a 50km radius of Christchurch, so it was very well recorded.”
Dr Gerstenberger agrees.

“It has been a really well recorded event for a number of reasons. We’ve certainly learnt a lot from it and it improves our understanding of ground shaking, liquefaction and other aspects.”