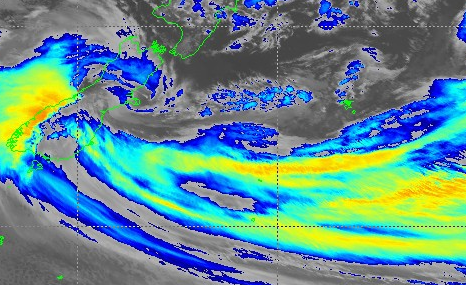 11pm — A state of emergency has been declared in Dunedin and Timaru due to flooding. Canterbury and Otago regions aren’t naturally built to cope well with moderate to heavy rain which is why we’re seeing such widespread flooding today in these areas.

It may be the middle of winter but the flooding today is due to the tropical airflow feeding in rain to the east. It’s actually a similar (much more intense) set up to the flooding that we had last week in the lower North Island.

Forecast Rain Radar for #Dunedin shows moderate rain with some heavy falls continuing. Rain slowly easing across Saturday AM
10pm, 4am, 6am: pic.twitter.com/swAOYYESi7

A State of Emergency has been declared in Timaru.

The graphic below shows the chance of rain in Timaru over the next 24 hours. The chance for rain is high although some dry spells will be in the mix, along with drizzly lighter spells. However with such an intensely deep low just offshore from Christchurch sucking down moisture laden air from the tropics this is not going to ease fast.

The black line in this graphic below shows that the air pressure will gradually rise – and as it does the rain should start to ease. But many more hours of wet weather is coming before signs of truly easing back.

– Left hand side of the graphic is 4pm Friday, right hand side is 3pm Saturday.

A State of Emergency has been declared tonight in Dunedin.

WeatherWatch.co.nz continues to make regular contact with Dunedin City Council into tonight about this rain event. Our advice has been that the Dunedin area is on the edges of this intense rain band but could be impacted. The rain is moderate and set in – and this is having a gradual cumulative affect.

Heaviest falls are tonight and while there is a high risk of rain tonight – and a chance of flooding and road closures – the graphic below shows how the rain should ease tomorrow morning as the air pressure rises, due to the low moving to the east.

– Left hand side of the graphic is 4pm Friday, right hand side is 12noon Saturday.

More rain will come and go overnight tonight with a mix of heavy falls and lighter drizzly falls. Dry spells in the mix too. There is definitely a chance of more flooding tonight with heavy rain likely returning this evening in some areas. Conditions don’t ease until Saturday – for some areas it may not ease until the end of Saturday.

Noon today (L) compared to now (R). Notice how the low is now backtracking to the upper South Island & expanding at the centre (weakening) pic.twitter.com/LJYOA66V2Y

Volunteers needed at the Mosgiel sand bagging operation at Memorial Hall. If you are out there and can safely get there please do

A regional state of emergency has been declared in Otago in support of Dunedin and Waitaki. Updates at https://t.co/JrP2YPcwHt pic.twitter.com/Hj0RihRd6K