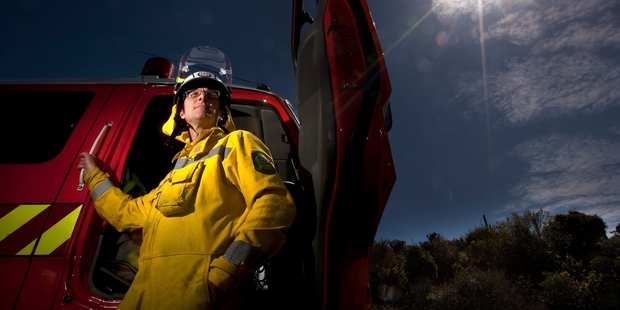 Rotorua rural firefighters are concerned the predicted El Nino weather pattern will bring with it the possibility of a busy fire season.

This year’s El Nino weather pattern is shaping up to be one of the strongest on record, bringing with it a higher risk of drought in east coast areas and the possibility of more frequent and stronger winds and the risk of fire.

Rotorua principal rural fire officer Richard Horn said the prediction of a long dry summer was not something he wanted to hear.

Mr Horn remembered 1997, which was the last bad El Nino weather pattern. “That was one of the busiest years of vegetation fires I’ve been involved in. Taupo’s had two large fires in recent weeks so locally there’s already the possibility for more.

“We always get a dry for a short period from January in the central North Island and Rotorua, and with El Nino patterns showing in other parts of New Zealand and Australia at the moment we are seeing it drier and windier,” he said.

A lot of the fires in 1997 were caused by people burning rubbish, particularly in the morning, which got out of control as the wind got up later in the day.

“We’re asking people in the city, parks, reserves and forests to be aware of what they’re doing especially with the fireworks season coming up and people need to be aware of how they dispose of cigarettes and lighting camp fires.

“Everyone is gearing up for a potential busy fire season and people need to be careful.

“If you do see anything out of place the best thing is to ring 111,” he said.

Meanwhile the region’s rural firefighters have been asked to be on standby to support firefighters in the South Island in the next week.

NIWA forecaster Chris Brandolino said it was not possible to forecast precise weather conditions but an intense El Nino had a more profound impact and there was an elevated risk.

“It’s reasonable to believe this one may have a similar effect – it will be a high scoring one.”

* A restricted fire season operates from October 1 – April 30.
* Permits are required in the Rotorua District.
* Permits are needed for any fire in the open, including incinerator fires, barbecues or hangi.
* Allow a week between your request and the time you intend to burn.
* For more information and to apply online go to www.rdc.govt.nz

* Normally an open season operates year-round depending on conditions.
* Permits are not normally required.
* Fires must be responsible and controlled and not cause a nuisance.

* Will be publicly advertised if imposed.
* Lighting fires in the open air is prohibited throughout Rotorua District.
* Anybody exposing forest and property to loss by fire is liable to prosecution.