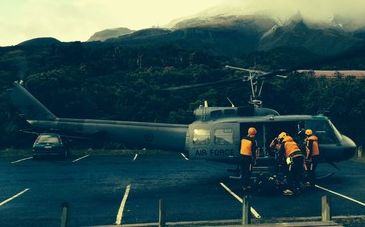 The climbers have also been named as Nicole Sutton and Hiroki Ogawa.

Alpine rescuers had found the 29-year-old woman alive when they reached her about 7.30am today. However, she later died.

Police said her climbing companion, a 31-year-old Japanese man, was dead when they arrived.

Rescuers had been working to get the woman off the mountain by foot, as the weather was still hampering efforts to reach the area by helicopter.

The Auckland pair had been huddled in a snow cave they had dug for themselves to shelter from the weather which has swamped the mountain since Saturday night.

They were were stuck on an outcrop called the Lizard on the north-western side of the mountain, near its 2500m summit, and had been communicating with police via text message.

Two other climbers who were also stranded on the mountain, John Salisbury, 65, and a 38-year-old woman, managed to walk down by themselves yesterday morning. They were taken to hospital with mild hypothermia and minor cuts and bruises.

Police said search teams spent the night on the mountain trying to locate the other two climbers, but their efforts were “significantly hampered” by the conditions.

They were forced to return to the forward staging area at Tahurangi Lodge about 4am today.

Taranaki area commander Inspector Blair Telford said a fresh search team was deployed about 3.30am, and reached the two climbers at 7.30am.

Alpine rescuers had heard the woman calling out, he said.

He would not comment on her condition when they found her, other than to confirm she was alive.

Rescuers had wanted to get the woman off the mountain “quickly and safely”.

Asked if her condition was serious, given the other climber had died, Mr said: “I don’t want to go down that track.”

Taranaki Community Rescue Helicopter pilot Mike Parker said earlier the Air Force had provided a helicopter which would make the next attempt to get up the mountain.

They were waiting for a break in the weather.

“We’re providing the Air Force with equipment, support and local knowledge to try and make it as smooth an operation as we can.”

The weather was not looking good.

“The Air Force have been up this morning but didn’t make any headway. We’ll just have to keep assessing the situation.”

Mr Parker said it was frustrating not being able to do anything.

“We’re a rescue helicopter and helping people in trouble is what we do. But with weather conditions like this, you can’t risk our helicopter and the people on board if it’s too dangerous. We just hope they hang in there.”

Pay tribute to the climbers – Contact the Herald here.