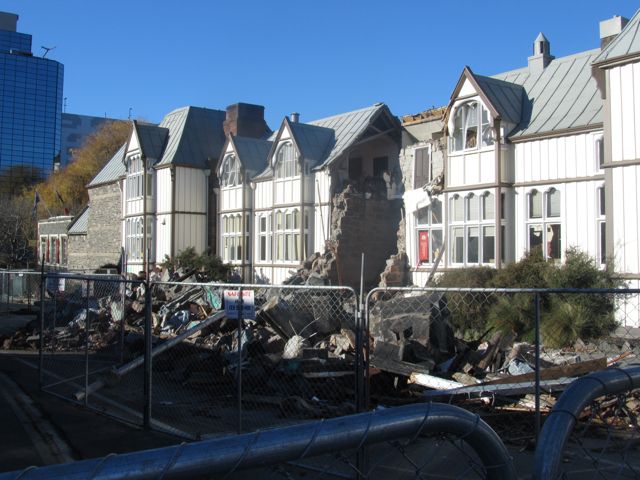 By Weather Analyst Richard Green — After enduring more than nine months of aftershocks in Canterbury many people are noticing a phenomenon locals have coined ‘quake brain’.

What is it exactly? Well it’s difficult to define precisely because it can manifest differently but symptoms can include poor concentration, inability to multitask even the simplest of things, tempers flare up over next to nothing, floods of tears appear from nowhere and even forgetting basic everyday routines has become the norm for thousands of people.

Managers are noticing their employees can lose focus easily, teachers see anxiousness and restlessness in their students and retailers are having to put up with stroppy customers.

At times it can be difficult to communicate our head space to those from further a field without sounding like we have lost the plot entirely. Endless nights of disturbed sleep or worse, no sleep at all due to the continuing aftershocks is major contributing factor. â€šÃ„Â®

On top of all of this are the added stresses and impact of lost loved ones, irreparable damage to our homes and businesses, lost jobs and also, not to forget the huge numbers of much loved pets who have either perished, wandered off or become highly stressed with the ongoing shaking.

It is such a different landscape from 12 months ago and after the news this week of red, orange, green and white zones, who knows where we will be in another 12 months? Much of what we love about our city is gone forever. While we know the city will rise again, at times it just seems so all encompassingly difficult that it can be hard to feel positive about our future.

Many of us are getting stronger as time goes on and are drawing on previously unknown reserves whereas others understandably are at the end of their tether and would move away in an instant if they could. Is this what the blitz was like in London where you never quite knew when the next wave of terror would strike? If this is in any way even partially like that horrific event I am amazed at how they stood up and survived, coping with years of being under attack.

When you notice that we’re not in good form (and sometimes we’re not even aware of it), if you could somehow reach out in whatever way to just support or be there for your Canterbury friends, it would go a long, long way. Empathy and patience is what’s needed for everybody as we continue to rock and roll.

Always, no matter where we are or what we’re doing, we live with the knowledge that at any moment another shock can and inevitably will hit. And with every new shock, we freeze, waiting to see it this is going to be another bad one. There’s no relaxing, no ability to reassure our kids they will be ok and no knowing when it will all stop.

I see that Christchurch has missed out on any international cricket next season. We’ve had no Super Rugby games. The Rugby World Cup games have gone. Can you imagine any international acts coming in the near future? No, me either.

It’s funny but everything has changed in so many ways. The way we look at things has altered, our priorities have turned on their head and most of life is seen with a very different perspective post September 4. What once may have seemed almost insurmountable in terms of a challenge in our lives now seems to pale into insignificance. We certainly aren’t sweating the small stuff anymore.

Children have coped remarkably well and even though some are frightened of what could come or remain scarred by events gone by, they have shown remarkable resilience. In years to come I hope that this generation of young Cantabrians will be able to bring their experiences of survival, courage and resilience to whatever they choose to do and become leaders in their chosen fields.

We’re aspiring to do the best we can, to stay positive, to endure the never ending after shocks as stoically as we can and the support from our family and friends has made more difference than they will perhaps ever realise. Sometimes relief for a moment can be as simple as smile from a neighbour or a complete stranger – these mean far more now than they ever did.

It’s the underlying fear at the start of every day that gets to me. When each member of the family goes to different places – school, work, malls, supermarkets. What if “it” happens today. Who will be in the wrong place at the wrong time? Of course these fears are never exposed to children but it’s hard to keep a balance between safety and normal ongoing life.

It’s the nights that get me with the constant rumblings but also the unknown of when the next decent shake is coming. Unusual times and the mundane things don’t matter at all anymore.
Ta for the article
ST

So heartbreaking and thanks for an excellent take on it. Our thoughts are all with you down there through this extremely challenging time.

Whilst not living in Christchurch I am a national disaster welfare volunteer who dealt with Christchurch people and circumstance for a whole month back in March and who has been on an off standby for deployment for tsunamis, further earthquakes in Chch and Japan, flooding in NZ and Australia, cyclones and tornado watches. What I am noticing is a quake brain or maybe more aptly “disaster brain” of sorts in that since that time I have had poor concentration – difficulty focusing on anything, irritability, tearfulness, always on the lookout for the next disaster, difficulty sleeping and flashbacks to some of the things I heard, dealt with and saw during that time. So I guess of sorts, although in no way the same as those who are suffering on a daily continuing basis the earthquakes down there, 2011 has traumatised me somewhat.