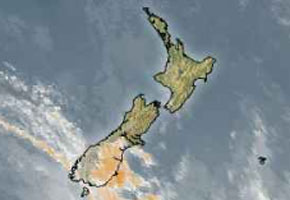 Blenheim has taken out the top temperature around the country so far with 28 degrees, due to warm northwesterly winds of course.

About Christchurch and even further south just on the coast an easterly breeze has been fairly persistent in hanging around however it should ease off to finally let the northwest through later this afternoon, although due to high cloud thickening up and moving north high’s may not be as illustrious as they could’ve been perhaps reaching 23 to 24 in the Garden City today.

About Wairarapa temperatures are in the mid 20’s but just north into Hawkes Bay and Gisborne high’s are around 20 to 21 degrees due to sea breezes. Auckland has 20 degrees today with some eastern suburbs perhaps getting a degree higher due to sunnier skies and slightly lesser wind speeds from the southwest.

The sunniest weather today has been about Canterbury right up along the east coast, also the North Island’s east coast and Bay Of Plenty looks great! Eastern parts of Northland and Auckland look good too however some cloud in western areas of the upper North Island from offshore is keeping temperatures a little cooler in those areas.