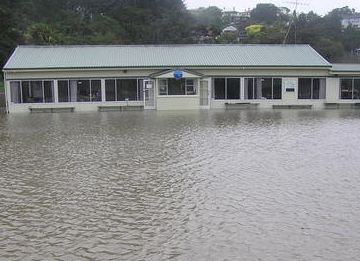 The worst of the weather has drifted away from Auckland and Bay of Plenty, but it left a large, soggy footprint on the regions and a few stories of close escapes.

Herald Island was the worst hit in Auckland, with 30 homes flooded, many of them now uninhabitable.

Piquet King had left his flooded one-storey villa behind, saying it would take months of cleanup before he and his young family could live in it again. 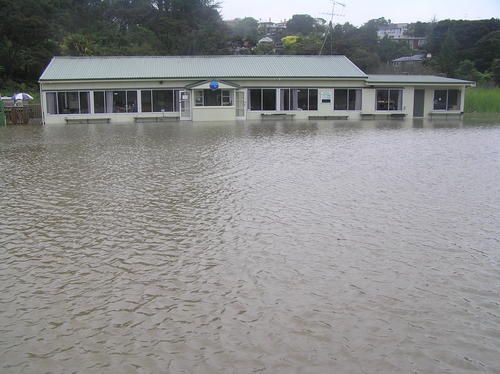 “The home is wrecked. And it stinks from the sewage. I’ve spent most of the day trying to start my car, which was flooded too.

“The water came up through the garden, up the boat ramp. Everybody’s alive, so that’s good. But we’re up in the air at the moment, three kids and nowhere to live.”

Auckland Council officials planned to measure the storm’s damage to St Heliers and Kohimarama beaches, which have had costly resanding done.

A council spokeswoman said the beaches had withstood the king tide “surprisingly well”, but there was some concern that the gradient of Kohimarama Beach – which cost $5.75 million to resand – had been altered.

The council will wait until after the next patch of bad weather, expected this weekend, before taking profiles.

Bent and broken steel handrails at Kohimarama indicated how strong the wind-propelled waves became at the height of Sunday’s storm.

The council was also concerned at the amount of debris on north-facing beaches, including several yachts which were unmoored by high winds.

“I’m hoping that it will be able to be repaired, but we won’t know until the damage has been assessed.”

The council had 82 emergency calls during the storm but officials believe many more affected home owners were afraid to call because their properties might be devalued.

The Fire Service attended a further 80 flooding incidents in the region.

Mr Ockleston said reluctance to report flooding hampered efforts to assess weak spots in the drainage system. It was thought that calling the council would result in a property’s LIM report being tagged a flood hazard and the property’s value dropping.

“But we would not necessarily do that because the problem might be due to a blocked drain.”

He said Sunday’s 3.5m king tide coinciding with significant rainfall was a rare event. The stormwater system was not designed for the demands of such a loading on pipes by both sea and rain water.

He said during the flash flood which closed Portland Rd, Remuera, the road was 1m below water.

Gates were installed to hold back big tides in Hobson Bay from entering the stream and wetland through pipes serving Portland Rd.

The gates automatically operated on Sunday but the stormwater coming down from the residential streets upstream overwhelmed the ponding area and spilled over the road.

Orakei Ward councillor Cameron Brewer said the drainage channel beside Portland Rd was turned into a torrid river. “Those residents pay a fortune in rates and deserve some assurances that plans are afoot to alleviate future flooding.”

A 2004 report to the region’s former seven territorial councils called for a doubling of the combined stormwater works programme of about $2 billion over 20 years.

The weather onslaught nearly claimed the lives of several people.

A 43-year-old woman reported missing after she failed to return from a swim in the Firth of Thames on Sunday night was found alive, suffering from hypothermia.

A woman who fell into the Whanganui River while on a kayaking trip was winched to safety yesterday morning, also suffering from hypothermia. A rescue had been stifled on Sunday because of poor weather.

And in Tauranga, two surfers were discharged from hospital yesterday, after being admitted in critical and serious conditions on Sunday evening.

The Papamoa youths, aged 19 and 20, were surfing large, choppy waves at the Kaituna Cut, near Maketu, when they got caught in a rip.

By Isaac Davison and Wayne Thompson