Big low still on track for this week 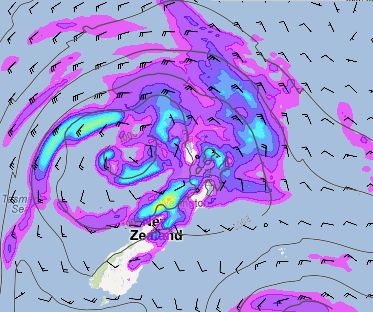 With the big 8 Day Low falling apart, you would think that the weather will be settling for most, if not all Kiwis.

The low is still expected to really make itself known late Monday or early Tuesday along the northern tip of the North Island.  A few showers will be possible as nor’westerlies pick up.

By midday Tuesday, the chance for showers will cover the western two-thirds of the North Island.

Wednesday looks to be the main event with this low.  Rain chances will cover the entire North Island and have moved as far south as Christchurch on the South Island.  Pockets of moderate to heavy rain will be possible for Wairarapa and Hawkes Bay, especially during the daylight hours of Wednesday.

The low moves off to our east by Thursday morning.  The weather will begin to clear for much of the country.  The southern and eastern tips of the North Island could still see some lingering showers.

But by Friday, the low should be gone and we could be looking at a settled day across the country.