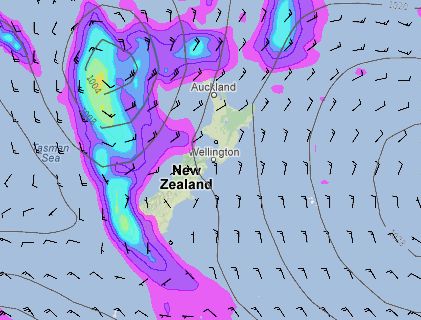 If you are wishing, hoping or even begging for rain, I’m sorry.  I wish I had better news.  Mother Nature just does not seem to want to oblige.

Current indications are that a new ridge of high pressure will drift east from the Tasman Sea and end up over New Zealand by Monday.

It will then drop anchor over us and sit there for several days.

It will go through a few changes during the upcoming week but the overall result will be the same, more dry weather.  Temperatures will also be warming under this high.  The western NI and eastern SI can expect to feel very summer-like as we go through next week.

There is a small chance for a few light showers over the deep south late next week and into next weekend as a front tries to push on shore.  But chances are small and anything that does develop is not likely to help much.

It’s a long way off yet, so a lot could change, but there does appear to be some good news coming our way as summer comes to an end.  It looks like a major change will be coming right around the 28th or the 1st.  A big Tasman low is expected to make its way to New Zealand, bringing with it some significant rainfall for both islands.

I know the frustration is continuing to mount for those desperate for rain.  Maybe we will get lucky and something unexpected will develop this week.  But I think that’s unlikely.  My best guess at this time is we are stuck with this dry stuff until the end of the month.

Homepage image/ Weather map for the 1st of March courtesty of Weathermap.co.nz