Big aftershock could still be coming 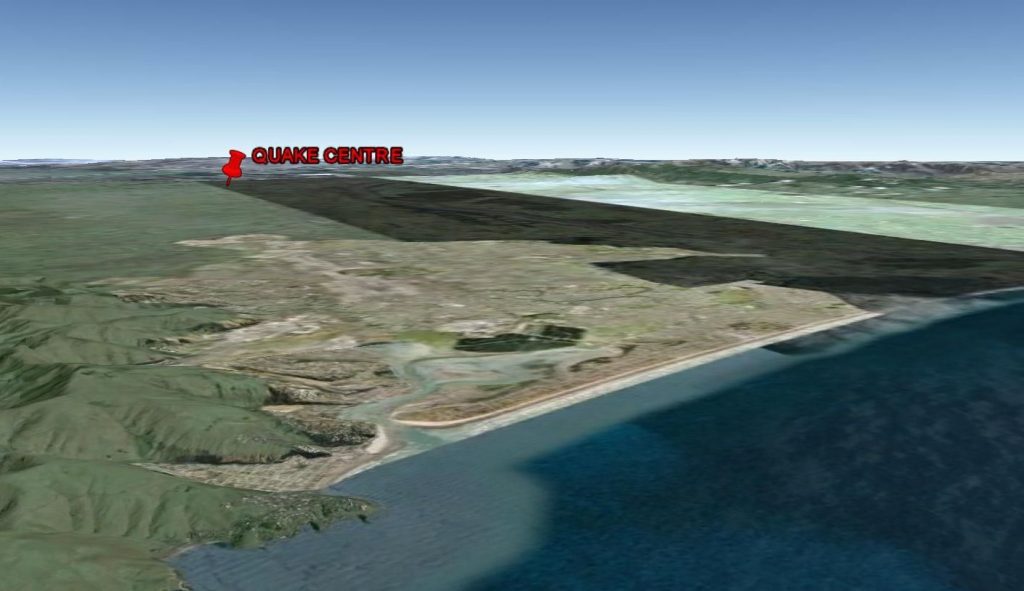 The rate of aftershocks following Saturday’s magnitude 7.1 earthquake appears to be lower than usual for a quake of that size, but people around damaged buildings in Canterbury should still be taking extreme care, says an expert.

The aftershocks could be big – within one order of magnitude of the original quake – so there is still the chance of a magnitude 6 shake hitting the un-reinforced masonry around Christchurch and in surrounding towns of mid-Canterbury.

Nearly 100 aftershocks have hit so far, the biggest of them rating at magnitude 5.5, and some have come from different directions from the original shake.

“It is still possible that we’ll have a magnitude 6 in the next week, and people ought to be aware of that, particularly if they are around structures which are already damaged,” said the manager of the geohazards monitoring section which runs the GeoNet at GNS Science, Ken Gledhill.

“For a shallow earthquake like this, they will go on for weeks,” Dr Gledhill told NZPA.

“And if a building is badly damaged, it won’t take much shaking to push it over.”

The moon goes around the Earth, as well as coming in closer, and this week it‚Äôs New moon and the second closest distance to Earth for the whole year. Imagine the moon continually sidestepping a sort of track like a monorail. And when it is mid-track we call it a ‘node’, being more focussed and in a direct line. It’s the difference between shooting at something from the side or front on. The node makes events happen. With weather, moisture can be gathering and temperature dropping, and when a node arrives, a developing cold front will deliver rain. So when New Moon, perigee, real closeness of perigee and node all come together, it gives much more potential for earthquakes, strong winds, highest tides for the year(which we are having this week), and extreme wintry weather.
And here‚Äôs how it went. On Sept 4th the moon hit node at 3.37am, an hour before the quake 4.30am. To compare, the 3 Feb 1931, Napier earthquake occurred at 10.30am – the node was at 9.21am, also an hour before. In 1886 the Mt Tarawera eruption that knocked out the Pink and White Terraces – the node was on 2 June, also New moon and perigee, and the earthquake then did the initial damage. The Murchison earthquake at Inangahua in 1968? The node had arrived the previous day and new moon 3 days later.
A node comes around about every 13.5 days. The danger this time will be all over when factors all go their separate ways which will be by Thursday, so aftershocks may continue until the end of the week.
Other events that have had these moon factors in the same combinations have been the 1855 Wairarapa earthquake (also an N+P event), the 1992, Christchurch Big Snow (N+P), and, still perigeal/apogeal; the 1968 Wahine storm, the 1979 Mt Erebus crash, the 1953 Tangiwai disaster, the 1963 Kaimai air crash, the 2004 Asian tsunami, and the 2009 Samoan tsunami.
But why absolutely no warnings from scientists? Anyone could see it coming – tremors were popping since 28 Aug, showing the faults getting switched on by the moon as it swept by every day. The shakes were around Rotorua and BoP on 30 Aug, then shifted down to Marlborough and Picton, some 4-mag on the Richter scale, then to Arthurs Pass and the West coast around 1 Sept, then one in Haast – edging south. Then Otago and Wanaka got hits on 3 Sept, in the 4-mag range, showing the activity to be firmly in the South Island. The next day Canterbury received the 7- mag jolt.
The seismologists must have seen activity heading south, and if they had added-in the moon factors of new moon+perigee+node they would have realised a big something was going to pop off when the node was due.
Another factor – August 10th-11th was the last new moon/perigee (but not as close) and on that day a 7.5mag earthquake hit Vanuatu and several smaller ones struck Wairarapa, Te Anau and Fiordland. Once again they drifted south after the 8 August node. October 6th-8th also brings a perigeal new moon, with the next node within range on the 10th.

Nice hindcasting again Ken. I find that warnings are always better if they are given in advance however. “Anyone could see it coming”, you didn’t or surely you would have told everyone. You had a media appearance on 1 Sept, why didn’t you mention it then?

I say it in every interview that is near a perigeal new or full moon, that it is a potential earthquake time. The closer the perigee the higher the risk. This one was very close. With aftershocks from this one from Wairarapa to Te Anau it gets a little hard to predict the actual street. But if I worked with those monitoring the seismic drums even that would be possible. Northern declinations (such as on 2 Sept) activate north-south faults, such as that which triggered this earthquake. It is obviously impossible to assess collateral damage without knowing the depth, but seismologists should be able to estimate that from the known depth of fault lines. We don’t need scientists for this – they had their chance and they blew it. Just get a good detective on the job.

Maybe Phil could get the original transcript of that interview and check, you have form for talking up your own forecasts after the event. Potential earthquake time is any time as shown here http://neic.usgs.gov/neis/qed/ and there’s nothing in that statement about the magnitude which is kind of important. The fact that you repeat the same warning every time there a full or new moon means eventually you are going to be correct. Note that this earthquake was actually 4 days before the new moon so even if people had taken it seriously they still would have gone to bed on the 3rd unaware of the danger. But I’m sure that still falls within your error bounds, what is it? A week either side. Heads I win, tails you lose.

This is all very well to say this…however if it is only a very slim chance then comments like this are not appreciated as it just adds to the level of fear that already exists down here! Can we somehow find out what the chances of that happening are? 5.4 was big enough. Peoples hearts cant take too much more.