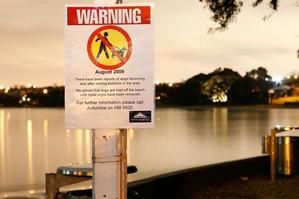 Warnings have been posted on another Auckland beach as more mystery poisoning cases emerge.

The Department of Conservation and the Ministry of Agriculture and Forestry are investigating the deaths of two dogs from an unknown poison on North Shore beaches. More than 1,000 fish and some penguins and seabirds also washed up dead around the same time dog owners began reporting their pets’ illness.

Signs have now gone up on Eastern Beach in Auckland’s Manukau City after reports of dogs falling ill.

People are being advised to not walk their dogs on the region’s beaches, take their children to the beach or have any contact with sea water or sea life.

I was flying back from Wellington to CHCH on monday. As we approached chch airport the major rivers north of chch were still mud. When you looked out at sea I could see the discolouration of the coastal waters from the dirty water but beyond the dirty water for miles and miles the water was a bright purple/violet colour. I have seen small patches of green here and there before but this seemed odd. Can anyone shed more light on this?