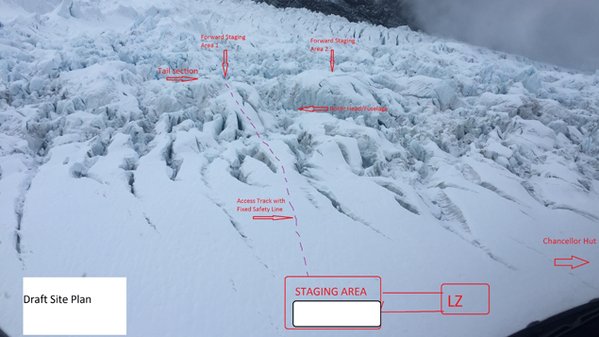 The wait continues today at Fox Glacier, with bad weather continuing to hold up a recovery operation following the weekend’s fatal helicopter crash.

The bodies of four victims who died in last weekend’s Fox Glacier helicopter crash will undergo post-mortem examinations in Christchurch today. They were taken there yesterday.

All four bodies have been examined as part of a formal identification process.

Police say photographs, DNA tests, and in some cases dental records will be used to identify bodies.

Image of the plans for the safe staging of crews on the Fox Glacier crash site when the operation resumes. pic.twitter.com/YFda88B0yQ

There are still three bodies to be retrieved, but due to deteriorating weather conditions rescue crews have been unable to safely get to the site.

That’s likely to remain the case for the next 24 hours.

Inspector John Canning reports the whole operation has been planned out carefully, and to follow through they’ll need a substantial window of good weather.

“Not just five minutes and that is the hold up. We’ve done the easy yards, now we’ve got to get down and do the hard yards safely and that’s going to take some time.”

The families of the Fox Glacier helicopter victims are finalising plans to get to the West Coast.

Inspector John Canning said six of those who lost their lives were foreign tourists and police have been in constant contact with their families.

“When we hear from them that they’re coming, we will try to find a combination for them in this town and we will look after them while they’re here.”

Meanwhile the possibility of a memorial service for 28-year-old Queenstown pilot Mitch Gameron has been touched on.

Alpine Adventures spokesperson Barry Waterland said that will be looked at, but at the moment the investigation is taking centre stage.

“There will be something happening,” Waterland said.

“Especially with the family of the pilot … all our pilots knew him very, very well.”