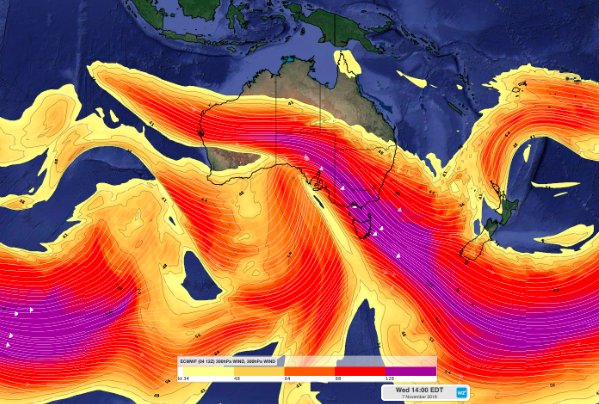 A shift in the jet stream is responsible for a period of severe weather affecting multiple states and territories in Australia this week and some parts of New Zealand.

Rain and thunderstorms will develop over a broad area of central and southeastern Australia during the next four days. This spell of late-spring storms is being caused by shift in the orientation of a band of powerful upper-level winds called the jet stream.

Our planet’s jet streams are bands of fast-moving air that sit about 10km above the surface. They typically flow from west to east and lie between regions of contrasting temperature.

There are four main jet streams that affect our weather, two sub-tropical jets and two stronger polar jets in each hemisphere.

When a jet stream flows from west to east, which is called a zonal pattern, weather system tend to be more more transient and generally less severe. However, when a portion of the jet stream bends and flows in more of a north-south orientation, called a meridional pattern, weather systems usually become more stagnant and often more intense. A meridional orientation of the jet stream is usually associated with periods of unusually hot or cold weather as well.

A bend in one of our planet’s jet streams will see a rather strong meridional pattern drift over Australia between Monday and Thursday, before a more zonal flow is restored from Friday.

As a result, widespread rain and storms are on the forecast until Thursday, before more settled weather returns later in the week.