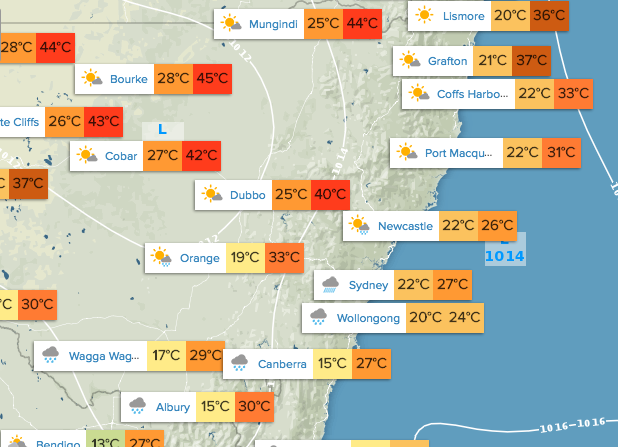 The recent spate of hot weather across eastern Australia has broken numerous long-standing records in New South Wales and it’s not over yet.

Walgett exceeded 36 degrees every day during January and had 12 days above 40 degrees for the first time in 47 years. January’s remarkable heat brought the town’s run of days above 35 degrees to 36 in a row, eclipsing the old record of 29 days set back in 1896 and 1882.

Walgett will continue to endure oppressive and record-breaking heat during the first week of February. Temperatures are forecast to reach 44-45 degrees each day until at least Tuesday, which would make the first seven days of this month the town’s hottest week in 139 years of records.

A number of centres experienced their hottest January on record in terms of average maximum temperatures including Moree, Narrabri, Tocal, Coonamble, Katoomba, Goulburn, Sydney and Canberra.

January was also a relatively dry month. Most of the state received below average rainfall, with the exception of small pockets in the northeast, south and far west.

Hay, Canberra and Bathurst all recorded less than 10mm of rain during the entire month. For Bathurst, this was just ten percent of their long-term monthly average and made it their driest January in 23 years.

A pool of hot air sitting over northern New South Wales today will spread back into southern and eastern parts of the state on the weekend. By Sunday, temperatures should push into the forties once again from Hay in the south to Bourke in the north and Richmond in the east.

Looking further ahead, hot and dry weather is expected to continue across much of New South Wales during February as a stubborn sub-tropical ridge dominates weather patterns.