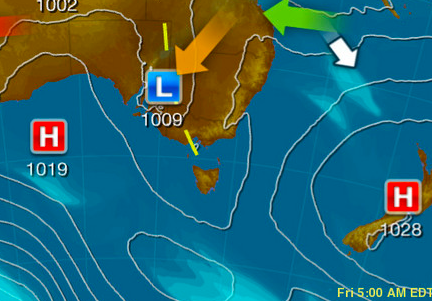 Melbourne is experiencing a record-breaking spell of November heat that will persist into the weekend.

Warm northerly winds flowing across Victoria this week are sending the mercury soaring more than 10 degrees above average. While days this warm are not unusual in Melbourne at this time of year, it’s extraordinary to have so many of them occurring back to back without any respite.

It was an eerie start to the day in parts of Melbourne as ship fog horns bellowed across Port Phillip Bay early this morning. The veil of thick fog mainly affected western suburbs and burnt off quickly after the sun rose and temperatures started to climb.

With the sun shining and northerly winds continuing to blow, Melbourne is forecast to reach tops of 33 degrees today and on Friday and 30 degrees on Saturday. The city’s average maximum at this time of year is 22 degrees.

Friday would also be the city’s fourth consecutive day at or above 32.6 degrees, a feat which has only happened on one other occasion during November on record, also in 2009.

A weak cool change should reach the city on Sunday and bring some relief from the heat early next week. The respite will be short-lived though, with temperatures forecast to reach the low thirties once again by Wednesday.