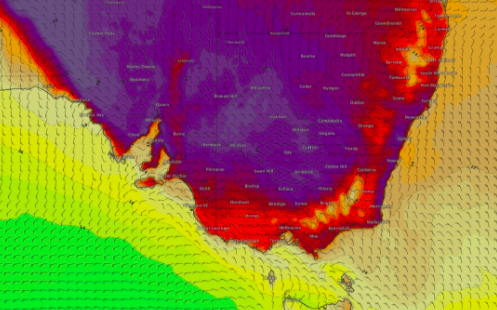 A burst of early-summer heat not seen in years will sweep across southern and eastern Australia this week.

The hot air has already affected Western Australia during the last three days. Perth reached tops of 36 and 38 degrees late last week, its hottest pair of days since March. Further south, Esperance sweltered on Sunday as the temperature soared 15 degrees above the December average, hitting 40 degrees.

The pool of heat is now spreading across southern Australia, making its way towards the east coast.

Energy demand will be high across the nation’s southeast for the next couple of days and nights as air conditioners battle to keep people cool at work and asleep at night.

Adelaide shot out of the gates this morning and was already 28 degrees by 9am, after climbing 11 degrees in under three hours. The city will reach the mid thirties today and tomorrow and should only drop to the mid-twenties tonight, making it the warmest night in about a year.

Melbourne will reach the low-to-mid thirties for the next two days and remain above 20 degrees tomorrow night, making it the warmest sleep for Melburnians since last summer.

Canberra should reach the low thirties today and tomorrow, followed by a warm night. If the mercury doesn’t dip below 20 degrees on Tuesday night it will be the warmest December minimum in 10 years.

Hobart and Brisbane will escape the worst of the heat this time around.

Adelaide, Melbourne, Canberra and Sydney could all reach 33 degrees or higher on Tuesday, which would make this the most widespread heat to affect the nation’s southeast mainland in five years, or 51 years this early in the season.

Adding the prospect of Hobart and Brisbane both reaching 28 degrees on Tuesday, this would be the most widespread heat event to affect Australia’s National Electricity Market in 23 years.

Hot air will team up with gusty winds during the next 72 hours to elevate fire danger ratings across the nation’s southeast as well.

Severe fire danger ratings and total fire bans are in place today across four districts in the southwest of South Australia, with similar conditions expected to spread further east during the next two days. Victoria’s Country Fire Authority is anticipating Very High to Severe fire danger across the state on Tuesday.

A cool change will bring relief in Adelaide on Tuesday afternoon, Melbourne Tuesday night, Canberra during Wednesday and Sydney on Wednesday evening. Temperatures will drop in all four cities by about 10-15 degrees in the space of 24 hours.