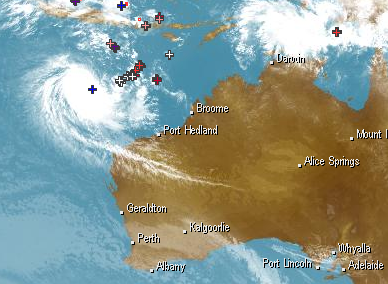 Tropical Cyclone Ernie became Australia’s sixth cyclone of the season when it formed around 900km to the northwest of WA during the early hours of Friday morning.

Fortunately, Cyclone Ernie poses no direct threat to Australia’s mainland or islands and should remain weak while moving into the Indian Ocean during the days ahead.

Ernie brings Australia’s number of tropical cyclones to six for the current season, which officially ends in three weeks. While this doubles last year’s tally, it’s still just half of the long-term average.

Australia’s cyclone season runs from the start of November to the end of April and there are usually 11 systems named in Australian waters during this time.

Last season was Australian quietest on record, with only three cyclones named in Australian waters between November and April.

It’s unlikely that we will reach the average tally by the end of April, although it’s still possible for tropical cyclones to develop during the cooler months of the year. Cyclone Raquel became the first cyclone to form off Australia’s east coast during July since at least 1970.