Australia: Cold weekend ahead for NSW 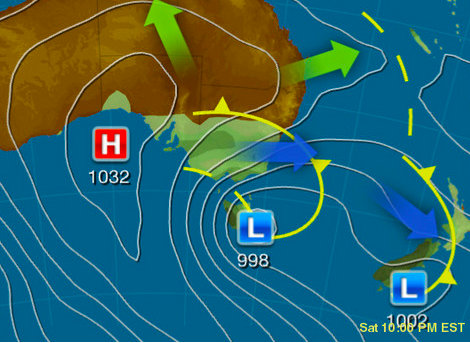 Parts of NSW could have their coldest day in two years this weekend, allowing snow to reach low levels along the state’s southern and central ranges.

A procession of cold fronts crossing southeastern Australia this week has already brought some welcome rainfall to southern NSW.

Looking ahead, a low pressure system moving to the east of Tasmania will send a surge of cold polar air across NSW from Friday into the weekend. This system may cause parts of central NSW to have their coldest day in a couple of years. For example, Orange may only reach about four degrees on Sunday, which would be its lowest maximum temperature since 3.1 degrees on June 25th, 2016.

Air this cold will allow snow to reach low levels on and west of the Great Dividing Range during the weekend, particularly on Saturday night and Sunday morning when the coldest part of the air mass is expected to surge across NSW.

In addition to snow, this series of cold fronts will also bring some welcome rain to the central and southern inland of NSW between now and Monday.

The heaviest falls during this time will be over the southern slopes and ranges, where accumulated weekly totals are likely to exceed 50mm in some places by Monday. Further north, some areas of central western NSW could collect 5-15mm by the start of next week.

While coastal NSW will remain mostly sunny and dry during the coming days, a deepening Tasman Low could bring cloud, rain and blustery winds to the state’s east next week.