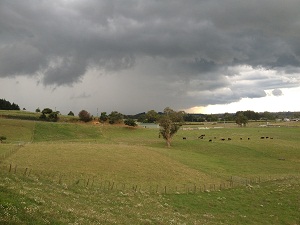 Satellite image are showing a well-defined boundary sliding across the North Island at this hour.  This boundary is the leading edge of some drier air moving onto the NI.  That’s is bringing the precipitation to an end for the upper and western parts of the island.  The sun will try to peek out as we go through the rest of the afternoon.  However, the rather breezy conditions will remain in place as the winds swing around and become more westerly.  In fact, gale to severe gale force winds are possible about Auckland and Northland.  WeatherWatch.co.nz forecasters say gusts may reach120 km/h.

The eastern NI as well as the central and upper South Island will continue to see both wind and rain for the rest of the day and into this evening.  Snow is still expected for the higher elevations with road snow warnings still in place for Lewis Pass, Desert Road, Porters Pass, Lindis Pass and Arthurs Pass.

WeatherWatch.co.nz readers have been sending in reports throughout the day of heavy rain and strong winds in places like Helensivlle, Ohakune, Pirongia, Te Awamutu, South Wairarapa, Taranaki, Rolleston, Westport and Nelson.