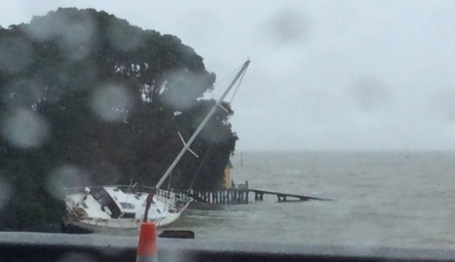 Weather problems struck Auckland overnight, with winds reaching hurricane force in some areas for a time.

High winds downed power lines causing major outages, trees have hit houses and blocked roads, and an unruly trampoline has flown from one backyard to another.

Gales were gusting between 90 and 120km/h across parts of the region, according to WeatherWatch.co.nz.

And in Manukau Heads, winds have been recorded at 140km/h and above.

Asquith Rd in Mt Albert, Miller St in Pt Chevalier, and Royal Rd in Massey were all closed due to power lines being down, a fire service spokesman says. Power is also out on Phillip Ave and Shetland St in Glen Eden.

On the North Shore, a roof is lifting from a house in Manurere Ave, Takapuna and a large gum tree has crashed on a house in Hanlon Crescent, Narrow Neck. The road has now been closed and neighbours say they had been warning the council about the tree’s shallow roots “for years.”

Meanwhile in Henderson, a trampoline described by fire crews as “unruly” was lifted from a backyard on Larnoch Rd, and deposited atop a garage three doors down.

Roofing iron was reportedly flapping from many other buildings across the city, and in Huntly, a garden shed had been blown of its foundations and into a neighbouring property.

In Wellsford, 1000 homes remain without electricity and power is unlikely to be restored until today, according to Vector.

About the same number of homes are without power in Titirangi, but it is hoped they would be restored by now.

A yacht is washed up in a bay in Herne Bay Auckland as strong winds swept through the region. Photo / Gill Kimrich

“A lot of construction going on and signs have been blowing over, [so] we have tipped over signs on Quay St for pedestrian safety,” he said.

Weather was lashing boats at their moorings in the Waitemata Harbour, and a yacht had been spotted caught up in overhanging pohutukawa trees in Herne Bay.

A fallen tree was blocking part of State Highway 1, between Puhoi and Mahurangi West Rd, with traffic down to one lane, the New Zealand Transport Agency had reported.

The road is congested and motorists are warned to expect delays.

The worst of the winds were expected to last until 3am Saturday, according to WeatherWatch.

A low pressure system is expected to move across the centre of the island overnight, bringing with it a period of westerly gales.