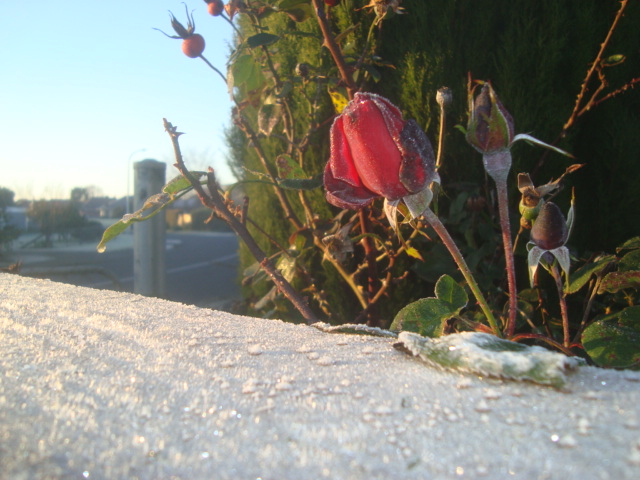 A stunning frost has this morning turned Auckland and parts of the ‘winter-less north’ into a white winter wonderland following a night of very low temperatures.

For the second morning in the row the normally frost free city has woken to frosts however this morning’s one is particularly heavy – with parts of Auckland receiving lower temperatures than most South Island main centres.

Hamilton has again dropped below -4 making it colder than Queenstown.

Head weather analyst Philip Duncan says cold air left over from the long weekend’s Antarctic cold snap is to blame.  “Polar air from the weekend has been held in place by a large high that has brought simply stunning, sunny, weather to Auckland for the past few days along with bitterly cold nights”.

Incredibly by 9pm last night frosts were already being reported in both inland and coastal parts of Auckland says Mr Duncan.

But it’s not just Auckland.  The Bay of Islands, one of New Zealand’s sub-tropical holiday regions, has had two significant frosts in a row.

Mr Duncan says the shortest day of the year is still 3 weeks away with the coldest time of the year typically another 1 and a half to 2 months away.

A youtube channel was created yesterday and a short movie clip of the frosts taken from Hukerenui was uploaded to the site overnight.

A stupendous frost this morning in Whangarei, my weather station showed a 0 deg temp but could have been colder as station temp goes no lower than zero. It was a fantastic sight, have not seen frost as heavy in the 20+ yrs I have lived up here. It has been followed by another fantastic sunny day though, very dry and quite warm in the sun.

We do sometimes lose our Winterless North image as I can attest to on many occasions.

But we cannot get better than this, beats the rainy cold stuff any day, gets people out and about, sitting in the sunny spots enjoying all the beauty of the day. And if physically working one can get very warm and start shedding top layer clothing.

Great stuff and hope it lasts for awhile.

16 years would be about right… I’d actually guess at 13. I remember a photo with me and my dog down at Madills Farm in Kohimarama when it was all frosted over and I think I was about 10 then. Wish I was back home to see it…. but at least its warmer in Sydney 😉

Auckland has a short memory ?? I remember 16 years ago, Auckland going through similar patch of really cold weather and ice, I know I lived there for years. Kaipara is also another area that has had good frosts – so much for a winter-less north! This morning Feilding was a white as a sheet too, icy on footpaths saw a few young kids slip on the way to school (in North Street area). Some roads in shaded area’s patchy ice. Brrrrrrr it was cold

I’m 36 and remember as a child growing up in Henderson Valley that it was not uncommon for our swimming pool to ice completely over on cold winter mornings. We used to have fun breaking through the ice in the puddles on the side of the road while we were waiting for the bus.