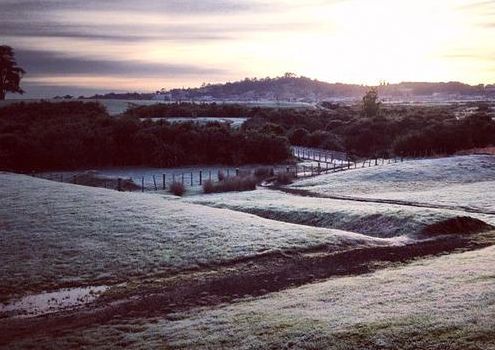 Auckland’s weather has been dominated by F words lately – flash floods last Tuesday, thick fog last Thursday and Friday and for the past few mornings frosts with a few fog patches in the mix too.

The run of frosts has been a little unusual but normal at the same time.  Most winters the city experiences a few frosty mornings, although some years the city can go with none.

This year there have been several already – and they started earlier than usual too.

Last winter, for example, June was incredibly mild.  July saw the first cold snap but it wasn’t until the nationwide polar blast in mid-August that Aucklanders finally felt the true force of winter.

WeatherWatch.co.nz head weather analyst Philip Duncan says the frosts lately have been more down to wind direction than especially cold air.  “We’ve had some cold southerly blasts this winter but really the frosty weather has been caused by an increase in sou’easters and southerlies – a wind direction that usually brings clear skies, mild days and very cold nights to Auckland – but the breeze is noticeably cold”.

Mr Duncan says this winter has been one of the frostiest in recent years – and we’re not even at at the halfway mark for winter.

“The difference between a south westerly wind in Auckland and a south easterly is substantiaL for Auckland – when it turns more sou’east it means clear skies and colder nights with the air coming off the land and not from over the warmer waters of the Tasman Sea”.

WeatherWatch.co.nz says the sou’easter for Auckland has some similarities to the nor’wester in Canterbury, except for wind speed.  “While sou’easters aren’t often gusty for Auckland like the nor’westers are for Christchurch,  they do deposit the rain clouds over the otherside of the ranges – in Auckland’s case that means Gisborne and Hawkes Bay gets the rain and showers while mostly clear skies spread into regions like Waikato, Bay of Plenty and Auckland” says Mr Duncan.

But as the centre of the high crosses the nation mid-way through this week expect to see the Frost word replaced with Fog.

“This morning we had reports of heavy fog around some parts of Waikato and Auckland as this south east wind flow finally dies out.  This means we’re likely to see more fog patches over the next few days with frosts fading out for many northern areas by the end of the week”.

While the fog is unlikely to be anything like last Thursday and Friday which saw around 100 flights cancelled across New Zealand, WeatherWatch.co.nz does advise air travellers to be up to date with the latest weather news and forecasts and check with airport and airline websites before flying in the morning.

Mr Duncan says the cold weather hasn’t been limited to Auckland, with severe frosts hitting Southland and Otago recently and overnight lows plunging there to between -6 and -11.

Another F word is Fine,and the difference also of a SW Vs SE is a SW is often a constant gale wheres a SE isnt and if is strong flow then its just in occasional gusts.