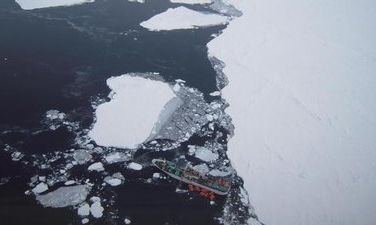 The plane flew out of Christchurch at 11am on its seven-hour journey to deliver pumping equipment and fuel to the stricken ship.

Sparta crew worked overnight to stabilise the vessel after the 23-year-old 55m vessel struck a submerged iceberg next to the ice shelf of Antarctica, east of the Ross Sea, about 3704 kilometres southeast of New Zealand.

They have made good progress, the Rescue Coordination Centre New Zealand (RCCNZ) says, as they wait for help.

Two fishing vessels are making their way to the ailing ship sinking in the Southern Ocean with 32 crew aboard but are not expected to reach the area for another two or three days.

Most of the 32 crew members, made up of 15 Russians, 16 Indonesians and a Ukrainian, have been evacuated on liferafts with fresh water and supplies and are now waiting on the ice.

Meanwhile the captain, officers and engineers stayed on board to pump water from the vessel and attempt to patch a hole in its hull to slow the intake of water.

After it struck the iceberg, Sparta issued a distress call about 3am yesterday which was picked up by a Norwegian rescue co-ordination centre and passed on to RCCNZ.

RCCNZ search and rescue mission coordinator Chris Wilson said crew had been pumping water from the hold overnight and moving cargo around the boat to stabilise it.

Ms. Wilson said: “They’ve made good progress – the vessel is certainly in a safer position than it was yesterday.

“The crew which left the vessel yesterday as a precautionary measure are now back on board, which is good. With Sparta now more stable, the vessel is the safest place for them.”

Ms Wilson said the crew were also working on patches which they will attach to the hole in the hull if they can lighten the vessel enough to correct the list.

Initial efforts to contact Sparta directly were unsuccessful but Sparta’s sister ship, Chiyo Maru No. 3, relayed a Mayday call to the rescue centre about 90 minutes later and confirmed Sparta was taking on water.

The crew face several days wait for rescue, as three ships making their way towards Sparta are being severely hampered by heavy sea ice.

Now, an airforce Hercules is making the mercy dash south.

It was expected to reach the Sparta by around 6pm today before refuelling at the US McMurdo Station and then returning back to Christchurch.

Ms. Wilson said: “The second pump will provide greater capacity to the crew and will also provide back up in the event one of Sparta’s pumps fail. Pumps aren’t designed to work 24/7, so it is important they have that security.”

There is no immediate danger of sinking, but Ms Wilson said the three rescue vessels – the Russian-flagged Chiyo Maru no. 3, New Zealand-flagged San Aspiring, and the Norwegian vessel Sel Jevaer were all still days away from reaching Sparta.

The weather in the area currently is calm and about 3 degrees Centigrade.