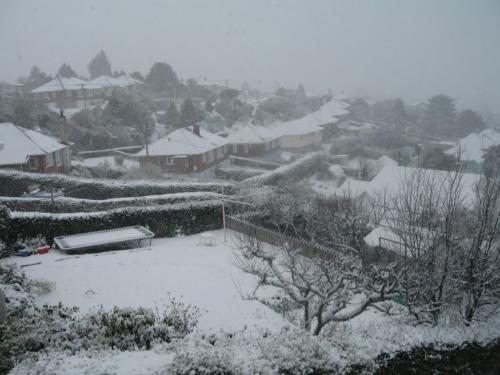 Do you have photos of Tuesday’s Antarctic blast?  Email them to us by clicking here!

The Antarctic southerly continues to work its way up the North Island Tuesday evening with the polar air almost in Auckland.

As of 9:30pm the cold air was spreading across Waikato and shortly into Auckland.  Temperatures south of Waikato are dropping fast this evening.  It’s just 2 degrees in Taupo, Palmerston North, Ohakea and it’s already -3 in Waiouru.

WeatherWatch.co.nz earlier reported that Wellington suburbs exposed to the southerly had wind chills of -5 this afternoon.  This evening Hutt Valley has a wind chill of -3.

Snow has closed State Highway 2 over the Rimutaka Ranges.  Police are unsure when it will be open again.  The Weather Watch Centre believes snow showers will ease by evening although light snow flurries and/or black ice may cause further issues overnight…

As of 7:45pm the cold polar air was spreading north of Central Plateau and into King Country and south Waikato…

Diana, a regular poster at WeatherWatch.co.nz, says sleet fell in Palmerston North this afternoon as the southerly came through.

WeatherWatch believes snow will fall on the Desert Road but doubts it will be heavy enough to close the State Highway – however we advise motorists to be prepared to take the alternate route around National Park should the snow set in tonight.   Of more concern will be black ice which is likely to form overnight as temperatures plummet to -7 in the area under clearing skies.

And while a few showers are affecting Auckland this evening a dry but bitterly cold day is on the way tomorrow.   Head weather analyst Philip Duncan says the high will only just make it into double digits.  “Aucklanders will wake up to 1 or 2 degrees tomorrow then only climb to around 11.  However in the wind the ‘feels like’ temperature will be closer to 6 or 7”.

He says if winds die down overnight severe frosts will be on the cards for many places with frosts possible stretching as far north as rural parts of Auckland.

The coldest air should reach the upper North Island by midnight tonight.

The cold southerly isn’t going to be leaving us anytime soon – the Weather Watch Centre is forecasting southerlies until early next week.  There is good news for those who hate the cold – northerlies are now in the forecast for mid next week in the upper North Island.

Just had a text from my mother – it’s snowing in Stokes Valley. I would guess we’re about 100 meters above sea level.