Home > News > Another week kicks off with a big low...

Another week kicks off with a big low 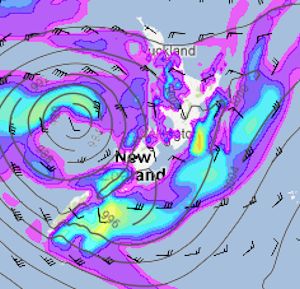 The storm system a week ago brought a lot of rain to the upper North Island.  Today, we are looking at another storm with the potential for more heavy rain.  But one of the things that makes this situation different is that this storm probably won’t produce as much rain as the last one.  But, given the already saturated ground, flooding is still possible.

This low will also be deeper than the last one.  In other words, the air pressure at the centre of the system will be lower.  That means a system more capable of producing strong winds.  Open parts of Northland and Auckland could see strong to severe northeast gusts today.

This system also has a track further south than the last one.  That’s a big contributing factor to the fact that, unlike the last low, this one will have a significant impact on both islands.  Not just the North Island.  Most of the heavy rain will fall on the upper North Island today, but the South Island could see at least some heavy rain tonight and tomorrow.

However this low, like last week’s, will likely be with us for several days.  That means a rainy and unsettled end of July and beginning of August.