Home > News > An unsettled week ahead for many...

An unsettled week ahead for many 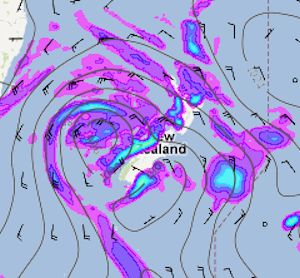 The low currently driving our wet weather will make its way across the country late tomorrow and Tuesday.  That means heavy rain for eastern parts of the South Island through tomorrow.  Clouds and showers for the North Island.

On Tuesday, a ridge of high pressure over the Pacific will combine with the dying low to keep an onshore flow going for the south-eastern Mainland.  That means showers could fall about Dunedin during the morning and afternoon and some heavy falls are possible.  Meanwhile, an approaching trough of low pressure from the Tasman could keep the western sections of the North Island wet during the day.  Showers are possible about Westland and Nelson at night.

Thursday will be the best chance for seeing dry weather across most of the North Island this week, although Auckland and Northland could see some showers by midday.  Settled weather should remain in place for the eastern South Island as well.

On Friday, yet another large low will come at us from the west and will be keen to dampen another weekend.  Showers should affect Northland and Auckland as early as the pre-dawn hours Friday and then spread across the North Island during the day.  The western South Island could see showers late on Friday afternoon.

Precipitation should affect much of the country, with the exception of the far south-east Mainland, through next Sunday.

This forecast is not written in stone.  So don’t go changing any outdoor plans just yet.  But, keep an eye on the latest forecasts.   We will keep you up to date.