All warnings dropped, clean up continues 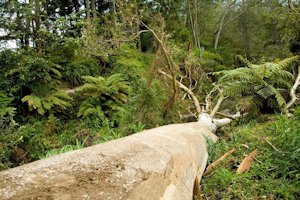 At 9:36 this morning, WeatherWatch.co.nz forecasters posted the news that so many have been longing to hear; “All MetService land warnings have now been lifted”.

That means New Zealand is getting a well-deserved break from over a day’s worth of wild weather.  A day that saw planes grounded, power knocked out, trees downed and even a massive slip.

There were even windows blown out.

Wind cracked a large window pane on the 10th floor of the Stamford Plaza on Albert Street, forcing firefighters to send it smashing to the street below.

Emergency services up and down the country had a busy night and the fire service responded to more than 180 weather-related callouts.

Auckland Glass employee Gaylene Morgan said they had been bombarded with requests for window repair.

“We’re just going from one job to another,” she said.

In Canterbury, 700 mainly American and European passengers from the Sea Princess were forced to stay in hotels after severe winds made it too dangerous for them to reboard their cruise.

Christchurch and Canterbury Tourism Caroline Blanchfield spokeswoman said the Akaroa community had rallied to help the stranded passengers, who were put up in Lyttleton and Christchurch hotels.

In Auckland trees were knocked over in Sunnynook and Glen Innes.

On the South Island, 200- tonne rocks tumbled on to roads in Fiordland. The New Zealand Transport Agency closed the road at 4pm on Friday after the avalanche, cutting off people in Milford.

WeatherWatch.co.nz reader Trish Bailey sent in a picture of a large tree that came crashing down in Rotorua (see the homepage image).

It wasn’t just rain and wind yesterday either.

WeatherWatch.co.nz readers told us about thunderstorms in Springs Junction and Westport.  There were even reports of heavy snow.  Roger Harper said it was snowing heavily yesterday evening in Tekapo and down to the bottom of Burkes Pass.

Mr Duncan said the jury was out on whether yesterday’s stormy conditions indicated a true weather bomb.