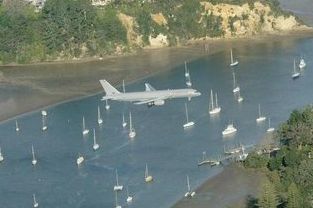 An air force carrier struck by lightning after taking off from Whenuapai Airbase has landed safely.

The RNZAF Boeing 757 was hit by lighting shortly after taking off from the airbase just before 9am.

It circled the airbase waiting for a break in the weather before making its emergency landing.

Head weather analyst Philip Duncan saw the jet taking off shortly before the thunderstorm.  “I saw it clearly taking off with a very black cloud moving in from the west.  A few minutes later I heard a big boom of thunder but never for a second thought the plane was in any danger”.

Mr Duncan says the squall that moved in was a large one that ended up affecting most of the city with a period of heavy rain, strong winds and some thunder.

Fire Service northern communications shift commander Scott Osmond said the plane had touched down safely at about 9:40am.

Emergency services at the airbase were checking it for damage, he said.

Air force spokesman Kavae Tamariki said it did not seem the plane had been damaged by the lightning strike.

It says “Carrier,” not Aircraft Carrier. That’s the difference between a ship and a plane my friend.

That sure was a huge long clap of thunder. Both dogs barked at it!

Didn’t know the RNZAF had acquired aircraft carriers 🙂 I wonder where the herald got that bit of dubious designation from (maybe the same source that had them referring last week to John Key using the ‘Royal Air Force’ for VIP flights).