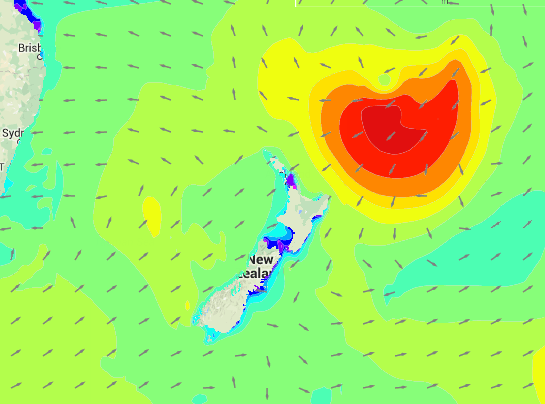 Showers, rain and swell are the key words for Tuesday’s weather – there’s plenty of the wet stuff around the country as the remnants of cyclone Victor pass us by.

A rain band travelling northwards along the West Coast of the South Island during the day may bring a few heavy falls, but this is nothing coasters aren’t used to.

There may be a patch of early fog about inland parts of the North Island first thing this morning.
Other than that, many North Island regions can look forwards to temperatures up in the high 20s or possibly low 30s for some inland areas.

The swell is fairly reasonable in northeastern parts of the North Island, due to ex tropical cyclone Victor – you can check out our detailed swell maps, here.

Warm, sunny and light breezes in Auckland, with temperatures getting up around the 30 degree mark at times, along with some light cloud cover on and off.

Cloudier in the capital, with temperatures only reaching the early 20s, but winds blowing a little stronger at times – around 25km/h from the northwest.

Gloomy in Christchurch, with heavy cloud, southerlies, and rain or showers through most of the day – temperatures won’t get up much past the mid teens.