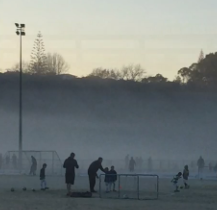 Jack Frost is taking a nap this week after a busy weekend dishing out cold starts in the most unexpected of places.

But his winter slumber will only last a few days and he’ll be back with a vengeance in time to chill us to the bone next weekend.

After shivering their way through a frost-bitten start to Sunday, Northlanders and Aucklanders can ditch the bed socks and store the woolly hats and mittens away as temperatures return to normal for the week.

Today, tomorrow and Wednesday will be settled for most, before the week turns back to what can be considered normal wintry weather.

“We’ve got a big low coming in from the Tasman Sea that’s going to mess our weather up quite a bit,” said WeatherWatch’s Philip Duncan.

“This week the first couple of days, there’s really nothing too much to talk about.”

Overall, expect “fairly settled” weather until Wednesday, with the odd downpour here and there. It will be fairly warm too, with Auckland possibly reaching highs of 17C, up a few notches for what you’d expect.

But it will return to the usual 13C or thereabouts with the change in weather.

A low will develop over inland Australia before pushing out to the Tasman, where competing wind directions will send it spinning into our shores later in the week.

Next weekend looks like it could be cold as frosty and cold southerlies move up the South Island and hit Wellington on Friday.

“It gets cold everywhere at the weekend,” Mr Duncan said.

He reckons inland areas will be the best spots and nominated Taupo in the North Island and Otago in the south as having the driest, clearest and calmest runs.

There’s good news for ski fields too, with the cool change bringing snow. After it clears there will be a cool period, ideal for snow-making.

Southerly changes in warmer than normal winters often bring snow with them, as happened in 2011 when the whole country got a dusting, including Auckland.

On Mt Ruapehu, Whakapapa and Turoa ski fields are expected to fully open by the school holidays, after the beginner slopes were open yesterday and today.

South Island fields yet to open are also expected to be operating soon.

Queenstown’s Winter Festival is also under way and those heading south will be greeted with relatively mild daytime highs in the early teens for much of the week.