A few settled days this week 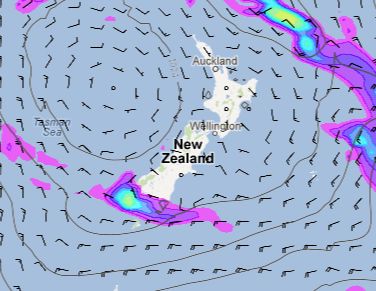 Today is getting off to rather wet start for many Kiwis.  Rain has already spread over the top of the North Island, extending along the west coast to Taranaki and then down to the north-western corner of the South Island.

Rain will continue to move over the country today.  Some far eastern sections are likely to miss out on the daytime stuff, but generally…it will be a wet Monday.

Tomorrow, a high pressure centre will build in off the Tasman.  There will likely be some lingering showers about the North Island tomorrow, especially in the morning.  However, the South Island should be pretty dry and settled.

Wednesday is looking settled for the entire country.  The only rain chances will be found down around Fiordland.

Thursday is also looking pretty settled for all of New Zealand.  It’s rare enough to have one settled day for all Kiwis.  Two is amazing.

Friday things start to get a bit shaken up as a disturbance starts push up from the south.  Showers will likely spread up the west coast of the Mainland after sunset on Friday and then continue into Saturday.

That chunk of energy and its associated precipitation is then expected to slide onto the North Island for Sunday.