Home > News > A busy night of earthquakes for the Gisb...

A busy night of earthquakes for the Gisborne region 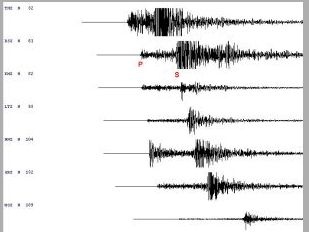 A number of moderate earthquakes off the coast of Tolaga Bay, north of Gisborne city, occurred overnight.

In the 24 hour period from 10 am on Tuesday, 13 April to Wednesday, 14 April six “felt” earthquakes with magnitude between 4.0 and 4.5 occurred just off the coast of the Tolaga Bay area along with a number of smaller earthquakes says GeoNet. 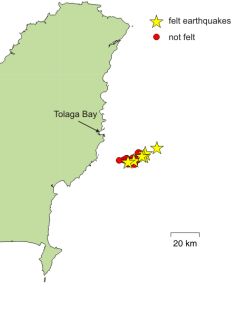 “Earthquakes of this size in this area are not uncommon but it is unusual to have a large number of them in a short time span. These earthquakes have been occurring in the same area as a region of slow-slip which is currently taking place“.
GeoNet says during slow-slip events an area on the interface between the two tectonic plates that is normally locked is temporarily released, allowing the overlying crust to move back eastwards at rates of a few millimetres per day.
“It is likely that the earthquakes and the slow-slip event are related but exactly how they are related is not clear. One possible explanation is that the slow-slip event is causing an increase in stress on the subducting plate resulting in increased earthquake activity within”.
This sort of correlation between slow-slip events and earthquakes was also observed in 2004 when Upper Hutt experienced its own swarm of earthquakes says GeoNet.